Writing in the Algemeiner, Jacob Sivak suggests some possible answers to this question. There are others: the far left ‘Arab-Jew’ counter-narrative, the postmodern view of Jews as colonial interlopers from Europe, etc. But Sivak’s conclusion vindicates the creation of a state – Israel – where Jews can defend themselves in a region torn by sectarian warfare. (With thanks: Joseph) 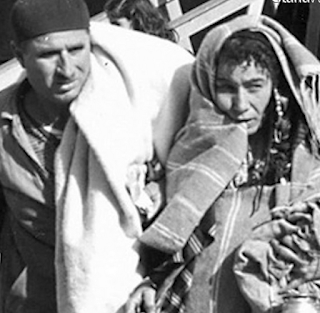 Why have these refugees been forgotten? Part of the answer has to be related to the numbers and public relations strengths of the Arab-Muslim community, which accounts for more than 25% of the countries represented in the United Nations. Moreover, as Chaim Genizi writes in The Holocaust, Israel, and Canadian Protestant Churches (2002), the establishment of the State of Israel “…contradicted the old Christian theological myth of Jewish national demise,” and while the Palestinian refugees are a suitable Christian concern, the same does not apply to Jewish refugees from Arab lands.

Yet another factor likely resides with the refugees themselves. In a Huffington Post oped titled “Letter from a Forgotten Jew,” David Harris writes, “Perhaps we Jews from Arab countries accepted our fate too passively. Perhaps we failed to seize the opportunity to tell our story.”

Finally, in an insightful book titled The Siege, Conor Cruise O’Brien writes, “The attitude of the Israeli establishment toward the Oriental Jews, in the fifties and sixties, and even later, might be defined as benevolent but pessimistic paternalism, strongly affected by negative racial attitudes and stereotypes, mitigated by the sense of a common Jewish bond. … They were Jews, but not quite the right Jews.”

The Middle East today is a cauldron of sectarian warfare, brutality, and population upheaval — particularly with respect to ethnic and religious minorities such as Kurds, Yazidis, Coptic Christians, and smaller Muslim groups such as the Sufis. Imagine for a moment that Israel was never created. How secure would the lives of a Jewish minority living in the Arab world be today? If forced to flee where would they go?