Lea Suissa, who left Morocco aged nine,  has this timely response in the Jerusalem Post  to IfnotNow and other US anti-Zionist groups  who accuse Zionist initiatives like Birthright of rehashing IDF talking points. She asks why these groups consistently ignore the suffering of Jews in Arab countries, including forced conversions, and praises Birthright for exposing their young tourists to Druze and Bedouin culture. (Isn’t it time Birthright also took them to meet Moroccan or Iraqi Jews?) 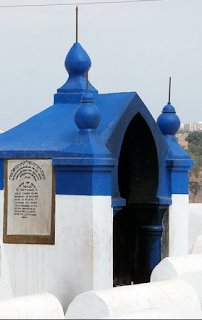 The grave of Solika Hachuel, who chose to die rather than convert to Islam

While Morocco did not expel its Jews like countries such as Egypt and Iraq did, Moroccan Jews still suffered from an intense wave of antisemitism from the moment French rule was declining, until the day my family left the country. In the 1950s, a wave of terror attacks targeted the Jewish community. It was just as bloody as the Second Intifada. While there was a decrease in anti-Jewish terror attacks after Morocco attained independence, Jews still feared for their future.

By the 1960s, the bulk of our community had already departed the country, and we were cut off from those dearest to us. At the same time, we remained Jews in a Muslim-majority nation, which is a very difficult situation. One of my relatives was abducted, raped and forcefully converted to Islam. Non-Muslims frequently suffer such indignities in the Arab world. In fact, when I recently traveled to Morocco, I visited the grave of Suleika, a Jewish woman who was martyred because she refused to leave the faith of her ancestors and marry a Muslim. To this day, she serves as an inspiration for Moroccan Jewish women, with many pilgrims from around the world visiting her grave. My relative spent her entire life as a hostage, unable to join the rest of our family in Israel. Many Moroccan Jewish girls got married young just so they would not face a similar fate.

Given what my family suffered, it is highly disturbing that the young Jewish American activists of IfNotNow demonstrate complete ignorance of my Middle Eastern history. While the epicenter of their mission is combating Palestinian suffering, they mention nothing on their website about the injustices suffered by the Jews of the Arab world except for a brief mention of the economic injustices we faced. There is no mention of the horrors Arab countries inflicted upon Jews.

I am an olive-skinned, marginalized Jewish woman from Morocco. When my son participated in a Birthright tour as an Israeli, he represented our voice and did everything he could to share Moroccan Jewish culture with the Americans on the trip. On the same tour, Americans were exposed to Druze and Bedouin culture as well as other aspects of Israel’s diverse landscape – far more than rehashing IDF talking points, as IfNotNow accuses Birthright of doing. Jews from the Arab world are invisible to IfNotNow and other radical leftist groups in the US.

For anti-Zionist Jews, the story of the Israeli-Palestinian conflict entails violent, white, “colonialist” Jewish settlers fighting against poor, dark-skinned, oppressed Palestinians. Yet there are plenty of impoverished Jews of color whose narrative they blatantly ignore.

Palestinian teenager Ahed Tamimi – the blonde-haired, blue-eyed terror advocate and media darling who participated in violent riots and smacked an IDF soldier – lives like a celebrity, going on world tours to champion the Palestinian cause.

Simultaneously, peaceful dark-skinned Middle Eastern Jewish refugees, who want nothing more than to be compensated for their suffering and to move on with their lives, can only dream of garnering the public spotlight that Tamimi receives.

It is time for this charade to end. If not now, when?