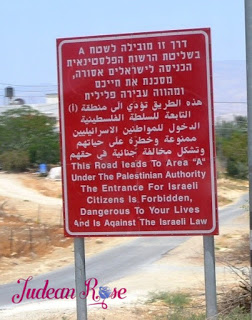 The language of occupation is an oft-wielded weapon against Israel. Those who use it have interests at odds with the existence of the Jewish State. They may refer to Israel as an “illegal occupier,” and the Jewish State’s presence in the Middle East as an “illegal occupation.” The IDF, Israel’s military, is variously known by the anti-Israel media as “occupying forces,” the “military occupation,” and even Israeli Occupied Forces (IOF). Judea and Samaria, and sometimes all of Jerusalem, are referred to as “occupied territories.” We also see “OPT,” shorthand for “Occupied Palestinian Territories,” in lists of countries we must choose from when filling out online forms or making purchases.
The purpose of this language is to negate the right of the Jewish State to exist on land that Arabs assert belongs to them. And since Arabs assert that all of Israel is on land that belongs to them, all of Israel is, according to this narrative, illegally occupied by the Jewish people, or put more simply, Israel is illegal, and therefore, has no right to exist. To date, there is no part of the current State of Israel in which Arabs would accept a Jewish state. Everywhere that Israel is, it is an occupier.
But the word “occupier” is more than just a vehicle for negation. There’s an unsavory quality to the word, suggesting that the entity in question is a usurper. Meaning: hey, that land belongs to someone else!
And of course, if Israel is an “occupier” and the land belongs to someone else, that makes Israel a thief. And the someone else must be Arabs.

Having painted Israel in this hideous light, the image of the Jewish State evolves into something shady and repellent. Using the language of occupation, in other words, serves not only to state your politics on the subject of Israel, it tells others that you have an actual dislike of Israel: that Israel disgusts you and is seen by you as morally corrupt, a thief that stole land that belongs to others—others with brown skin!

The language of occupation suggests, in fact, that you’ve made a moral choice regarding the State of Israel. That you believe Jews have no right to their ancient and indigenous territories, since some Arabs were born there in the 19th or 20th centuries. You believe this latter day history cancels out Jewish rights. And certainly it cancels out the bible, which is describing really old stuff, if any of it happened at all. Which you doubt.
Some people who use occupation language use it in an “ethical” sense. They aren’t talking about mandates and borders. They are talking about one people ruling over another people by force. They are saying that Arabs don’t wish to be ruled by Jews, therefore Arabs who live under Jewish rule are “occupied” and live under “occupation.” And here’s where it really gets nutty. Because the protests on the Gaza border are supposedly against Israeli “occupation.”

Except that Israel doesn’t rule Gaza. Hamas rules Gaza. Israel left Gaza, lock, stock and barrel, in 2005. The IDF is not in Gaza, therefore there are no “occupation forces” in Gaza. Hence, Gaza is not “occupied.” Not even a little bit.

What then are the people of Gaza, protesting? That our soldiers are on their border to prevent them from killing us? Is this the meaning of occupation? The United States has soldiers along its border with Canada. Does that mean that the United States is occupying Canada?
Is everything occupation? Or is it only occupation when it concerns the “thieving” Jews?
From a legal standpoint, of course, the entire subject of occupation remains murky. At the very least, clarification is in order. We know that when Jordan acquired Judea and Samaria and parts of Jerusalem in 1948, this was not considered a legal occupation by the nations of the world. Only the UK and Pakistan deemed Jordan’s occupation of these territories a legal one, representing a minority opinion. You’d think that if Jordan was the illegal occupier of Judea, Samaria, and Jerusalem—a thief, and a usurper of another’s land—that would make the Jews the ones they stole from. Unless we’re missing something, here.
Which we’re not. Because the truth is that the Mandate for Palestine remains legally binding until today. And the Mandate for Palestine sets forth the right of the Jewish people to settle anywhere west of the Jordan River. Which is why Jordan was labeled an illegal occupier by the nations of the world.
And get this straight: it was never about 1967. Take it from Mahmoud Abbas, leader of the pack:
“Israel, since 1948, has persisted with its contempt for international legitimacy by violating United Nations General Assembly resolution 181 (II), the partition resolution, which called for the establishment of two states on the historic land of Palestine according to a specific partition plan. Israeli forces seized more land than that allotted to Israel, constituting a grave breach of Articles 39, 41 and 42 of the United Nations Charter.”
Do you see anything about 1967 borders, there? Nope. He’s talking about Partition. Which was just a recommendation. Which his people rejected.
Let’s face it: the Arabs made out big time after WWI when they divvied out the bits and pieces that make up the Middle East. There are 22 states where Arabic is the national language and Islam the national religion. Their culture holds sway all over the Middle East.
Not to mention the fact that the Arabs could have stayed right where they were in Israel as a privileged minority. Israel is a democracy. It would have been fine. But since they up and left, the 22 states comprising their brethren should have absorbed them and poof! No more refugee problem. It’s what we did with the Jews THEY threw out of their countries. It’s called: “population exchange.”
Look, they made a gambit for the Mandate. They lost. We won. Finished. Time to man up and be a graceful loser.
Implying that Jews are thieves, having taken land that belongs to others, or telling Jews that they cannot build homes within the territory that comprises the Mandate for Palestine, is ugly and antisemitic, as it flies in the face of unanimously accepted international law. Professor Eugene V. Rostow, an expert in international law who helped draft resolution 242, explained that having affirmed the Mandate with the right to Jewish settlement anywhere between the Jordan River and the Mediterranean Sea, the world essentially negated any future Arab claims to the territory.
“Under international law, neither Jordan nor the Palestinian Arab ‘people’ of the West Bank and the Gaza Strip have a substantial claim to the sovereign possession of the occupied territories. Jordan cannot base a claim to the territory on its military occupation and administration of the West Bank between 1948 and 1967, after the Arab war of aggression in 1948. Neither can it base a claim on its attempt to annex the territory in 1950. The annexation was not widely recognized and has been withdrawn. By protecting Arab “civil and religious rights,” the mandate implicitly denies Arab claims to national political rights in the area in favor of the Jews; the mandated territory was in effect reserved to the Jewish people for their self-determination and political development, in acknowledgment of the historic connection of the Jewish people to the land. . . (emphasis added)
“There remains,” said Rostow, “simply the theory that the Arab inhabitants of the West Bank and the Gaza Strip have an inherent ‘natural law’ claim to the area. Neither customary international law nor the United Nations Charter acknowledges that every group of people claiming to be a nation has the right to a state of its own. International law rests on the altogether different principle of the sovereign equality of states. And nearly every state inherited from history contains more than one ethnic, religious, or cultural group: the French in Quebec, for example; the Basques in France and Spain; the Flemish in Belgium; the Kurds in Turkey, Iran, and Iraq; and so on.
“Therefore, it is a rule essential to international peace that claims of national self-determination be asserted only through peaceful means. The international use of force to vindicate such claims is and must be strictly forbidden by the United Nations Charter,” insisted Rostow, making the violent Gaza protests an obscene mockery, considering the people of Gaza were granted the right to self-determination, unilaterally, by Israel, in 2005.
The late Howard Grief, an advisor to Israel on international law, suggested that Article 80 of the UN Charter, once known unofficially as the Jewish People’s clause, stipulates that the UN may not transfer any part of Palestine to any non-Jewish entity. That would include the Palestinian Authority and Hamas, for instance. Article 80, in fact, gives Jews the right to build settlements anywhere they wish from west of the Jordan River to the Mediterranean Sea.
Which makes one wonder about the legality of Israeli Jews being barred from “Area A,” which, after all, is west of the Jordan River. Who or what is an occupier? And who is right at home?