When wars — and even battles — are over, we naturally ask: who won?

Normally, victory brings with it the acquisition of advantages like increased power and land, while losing brings not only a certain degree of humiliation, but also surrendering land and control.
And stalemates — those often bring recriminations and political headaches, especially when you are more powerful and are expected to win.

Over the years, wars between Israel and Hamas have brought a series of ceasefires with each side claiming victory:

And now, another clash — one that wasn’t even given a name.

At The Jerusalem Post, Anna Ahronheim describes it as A Deadly Weekend Which Wasn’t Even A War. She describes it as a case of terrorism and retribution where “both sides upped the ante to a deadly level not seen since 2014’s Operation Protective Edge.” After snipers wounded an IDF officer and a female soldier, Israel responded with an Air Force to strike on a Hamas target in Gaza, killing two terrorists.

But matters did not end there.

Hamas responded with almost 700 rockets, during which 4 Israeli civilians were killed:

Moshe Agadi, the first Israeli civilian killed since 2014, was killed outside his Ashkelon home by shrapnel to his stomach and chest; Moshe Feder, 68, from Kfar Saba, was killed after a Kornet anti-tank guided missile struck a car near the Gaza border between Yad Mordechai and Sderot; Ziad Alhamamda was critically injured in his chest by shrapnel from a direct strike on an Ashkelon factory; and Pinchas Menachem Prezuasman was killed after he suffered severe shrapnel injuries to his chest while running to a shelter in Ashdod.

o  Overwhelming Iron Dome with massive, simultaneous firings. (They claim they were successful. Israel denies this.)
o  Aiming an explosive-laden drone at an Iron Dome battery.
o  Launching a Kornet anti-tank missile into a civilian van (Hamas tried this last year, but fired on the bus only after IDF troops had gotten off.)

For its part, Israel did something different too. It renewed the practice of targeted assassinations, killing Hamed al-Khoudary, the money man who brought funds from Iran to Gaza. This was the first such assassination since 2014, and it was carried out despite the possibility of leading to all-out war. Instead, Israel warned that the policy would continue — and another Hamas terrorist was later killed while riding his motorcycle and the IDF also targeted the homes of other senior terrorists.

Apparently, Hamas tried to get a ceasefire early on, and Israel refused, wanting to make sure that this time around the ceasefire would be on Israel’s terms.
Even then, Netanyahu made a point of stressing that Israel was not necessarily finished with Hamas: 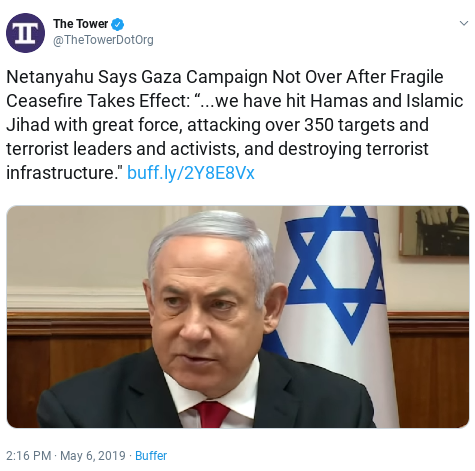 Netanyahu was under pressure to preserve some semblance of deterrence against Hamas terrorist attacks, if not an outright victory.

On Twitter, Elijah J. Magnier, who writes for Kuwait’s Al Rai Media Group claimed that Hamas was the clear winner: 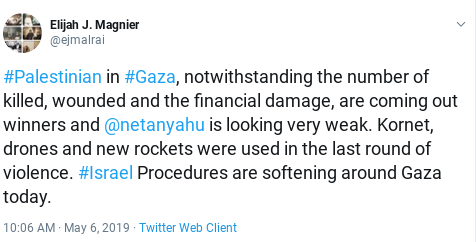 On the other hand, at Ynet, Ron ben Yishai writes that Israel preserved that deterrence:


Israel stood strong in the face of Hamas pressure, and resisted a ceasefire, under adverse conditions; a lesson Hamas will remember before renewing fire the next time its demands are not immediately met

He contends that Israel accomplished its objectives, and that “Hamas begged for a ceasefire, for a full 24 hours, before Israel agreed to one.”


o  It was Hamas that needed a ceasefire before Ramadan, more than Israel needed it in order to be able to hold the Eurovision song festival
o  By targeting military targets, even when those were the homes of Hamas and Islamic Jihad commanders, Israel was able to defend the legitimacy of their operations in Gaza
o  Unlike in other operations against Hamas in Gaza, leaks to the media were prevented

A key to Israel’s response to the Hamas rocket barrage was preparation, which gave the IDF “the upper hand in dictating events”:


In this round of fighting, the IDF came prepared with a list of high-quality targets. It also had a planned schedule of escalation, to respond to the militants’ actions, including attacking their cyber capabilities and hitting their attack drones. Some of IDF’s actions are still under wraps.

This time around, the IDF was not limited to bombing empty buildings and bases.

But Yishai does have a major criticism. Lives could have been saved if Israel had evacuated residents from the border and if more Iron Dome batteries had been deployed.

And of course, the ultimate goal must be to remove Hamas.

Finally, there is retired general Amos Yadlin, who wrote on Twitter that “the balance sheet…with Hamas is mixed” because Israel still follows the strategic goal of “quiet for quiet” instead of actually restoring deterrence.

On the positive side:


o  4 Israelis were killed and dozens were wounded
o  Daily life was disrupted in a significant portion of Israel
o  Hamas determined the start and — according to Yadlin — the end of the fighting, making Israel hostage to Hamas demands
o  Israelis don’t know the contents of the previous ceasefire agreement, nor of this one
o  Israel may still have deterrence against all-out war, but not against these sporadic conflicts
o  Israel is still allowing payments to the terrorist groups, while not speaking with more moderate groups of Palestinian Arabs
o  The issue of disarming the Palestinian-controlled territory has apparently been forgotten
o  There seems to be no effort to deal with Hamas’ military build up
o  These battles send the message that using terror is more successful than preventing it in achieving goals

Yadlin’s conclusion is that the strategy of “quiet for quiet” has outlived its usefulness and instead deterrence must be restored by hitting Hamas hard and sending the message that using terrorism carries with it a heavy price and does not get results.

Most of his negative criticism is not focused on the conduct of the battle, but rather Israel’s overall policy towards Hamas. And unlike Yishai, Yadlin does not think deterrence has been restored at all.

Also, Yadlin believes that Hamas in fact, did dictate when the fighting ended.

Just 10 years ago, during Operation Cast Lead, Netanyahu was in the opposition, and clear in his criticism of how the government was conducting the war with Hamas.

Back then Netanyahu insisted:


o  Hamas was controlled by Iran and it should “ultimately be removed”
o  “Hamas is at the service of Iran and militant Islam…Israel cannot tolerate an Iranian base next to its cities.”
o  “If Iran has nuclear weapons then a forward base like ‘Hamastan’ in Gaza becomes 10 times more dangerous.”
o  Toppling Hamas from power should be a long-term goal, and “if the government also decides to adopt this goal, we will back it.”

Yet even then, Netanyahu at the time did not insist that removing Hamas had to be the goal during that particular operation.

And putting aside who would replace them, removing Hamas once and for all will require more than just sending in the airforce and using targeted attacks. It will mean sending in troops — and incurring loss of life.

Netanyahu has tried that before, in Operation Protective Edge.

Is he willing to do it again?

Yaacov Lozowick wrote in 2014, when he was the state archivist, about bringing Netanyahu a commemorative volume of documents dedicated to Menachem Begin.  Professor Arye Naor, Begin’s Cabinet Secretary, came too and discussed with Netanyahu how Begin managed the war in Lebanon compared with Netanyahu’s own methods in Protective Edge.

The discussion turned to Begin’s agony at the deaths of IDF soldiers, and Netanyahu’s own difficulties in sending men to die.


It proved harder than he had expected. “I thought a lot about Begin this summer, and I understood him better”

There is a profound difference between hearing about bereaved families, and actually being in one: he knows about that difference, and understands it from personal experience. But to his surprise – this was my impression – sending soldiers to their death turned out also to be hard to a degree that one cannot appreciate in advance.

We had expected to spend ten minutes in his office. The ten minutes became fifteen, then twenty; the twenty minutes became thirty, and the prime minister spoke of the horrible price of war, and of the difficulty in deciding to pay it.

“The soldiers fear death. They try to strengthen each other, and try together to be strong as a group, but they are afraid.” He knows they are afraid, and that some of them will be killed, and he sends them. A ground operation, he knows what awaits them, what preparations the enemy has made: “Some of them will die. It is inevitable.”

“They must be sent only when there is no other choice left. They must be brought back at the very first possible moment, as soon as the immediate goal has been achieved. Later, once they’re out, we’ll see what happens, but first, get them out, out, out.”

“And every night I’d get home in the wee hours, and my wife would be awake, waiting for me. She spent the days visiting the bereaved families. I only spoke to them on the phone, with each and every one of them, but she sat at their side, and at night she would tell me about them. We must send them, and we must bring them back, and I didn’t appreciate how hard it would be. A leader who loses the understanding of how difficult it is, ought to lose his job.”

We say that one of the reasons for the existence of Israel is that it serves as a refuge and defense for Jews. We say that if only Israel existed during WWII, Jewish lives would have been saved. The pressure now on Netanyahu must be enormous for him to show that he and IDF are up to their task.