The Iraqi government floated a scheme to deport 50,000 Jews to Kuwait in 1951, according to documents in the UK National Archives. Lyn Julius uncovers this little-known episode in The Times of Israel:

A law passed in March 1950 permitted legal emigration, on condition that the Jews, who were being harassed and persecuted, forfeited their nationality. Those Jews who wanted to leave were stranded in Iraq while waiting to be airlifted to Israel. By mid-November 1950, 83,000 Jews were thought to have been deprived of their nationality and were ready to depart, but only 18,000 had left the country. Israel had been airlifting about 4,000 a month via Cyprus, as the Iraqi government would not allow direct flights: the stopover made the operation slow and cumbersome. Israel made things worse when it halved he quota in November 1950 to give priority to Jews from Rumania and Poland, thought to be under greater threat.

In Iraq the waiting Jews had been stripped of their rights and many had no means of support. This made them vulnerable to expulsion by the Iraqi government.
Iraq feared that they would be a danger if it took months, even years, for the Jews to be airlifted to Israel. The government predicted a repeat of the 1941 Farhud pogrom. A confidential memo from the British embassy in Baghdad to the Foreign Office relayed Iraq’s anxiety.

It was the bombing of the Massouda Shemtob synagogue on 14 th January 1951, with the loss of three lives, that lent even greater urgency to the matter. The incident dramatised the plight of the Iraqi Jews. The British embassy sent its memo on 5th February 1951.

Iraq was considering transporting these Jews anywhere outside Iraq – such as Jordan, Syria or Kuwait and sought great power support for its plan. ‘Unless a solution were found the Iraqi government would be compelled to drive them over the frontier to Kuwait or elsewhere,’ the British embassy in Baghdad reported to London. 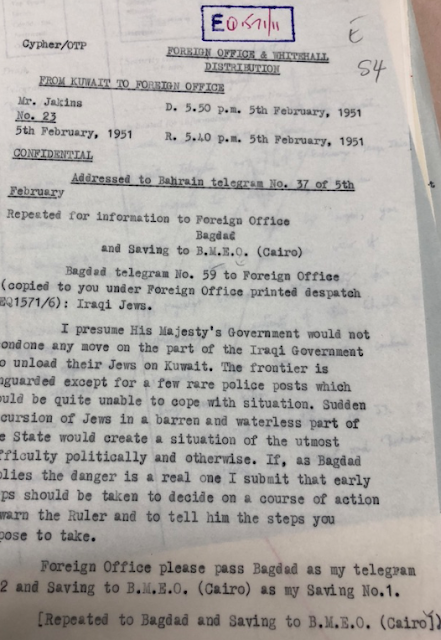 The Iraqi plan to dump  Jews in Kuwait ‘would create the utmost difficulty, politically and otherwise’, the British warned in a confidential memo.

Jordan refused to allow convoys of Jews to be dumped at the frontier with Israel in spite of a promised Iraqi military escort. The Jordanian option was quickly quashed – the regime feared that the Palestinian refugees would witness the Jews passing through. It would be strange indeed if Iraqi Arabs and Palestinian Arabs clashed over the security of Iraqi Jews.

Less well known is the Kuwaiti option. This too was a non-starter. Northern Kuwait did not have the water or resources to accommodate the Jews. The Iraqis talked of locking the Jews up in detention camps.

The British ambassador told the Iraqis that the UK could accept no responsibility for the Jews. Its interest was purely humanitarian. The only solution was for Israel to increase its monthly quota for Iraqi Jews. In any case the UK had not been consulted about the law stripping Jews of their citizenship. The US refused to cooperate.

The bombing of the synagogue, which was used as a registration centre for departing Jews,  galvanised the Israeli government into drastically stepping up the numbers of Jews to be transported to Israel before the law allowing legal emigration expired in March 1951. Yet Israel had neither the money, food nor housing to cope with them. In spite of all its threats, the Iraqi government still managed to hold up the airlift by dragging its feet on issuing the refugees’ paperwork.