I am just starting to read an excellent but fairly obscure book called The Fervent Embrace: Liberal Protestants, Evangelicals, and Israel by Caitlin Carenen.

It goes through how mainstream and other strains of American Protestants dealt with Jews and Israel from about 1930-2000.

The book is well researched – and every page illuminates the thinking of Protestants in America, in sometimes shocking ways.

During the 1930s, mainstream Protestants were antisemitic. They regarded Jews as people who must be assimilated into American society, meaning to become Christians. They protested Jewish immigration to the US. Many of their charismatic leaders openly touted the Protocols of the Elders of Zion as being legitimate.

Carenen documents all of this in scholarly detail.

The Christian Century, a mainstream Protestant periodical, was one of the more influential publications of the period. (It still exists.)

In this section from the book, we see how the Christian Century looked upon Zionism – in the same way that antisemitic Christians had traditionally looked at Jews. 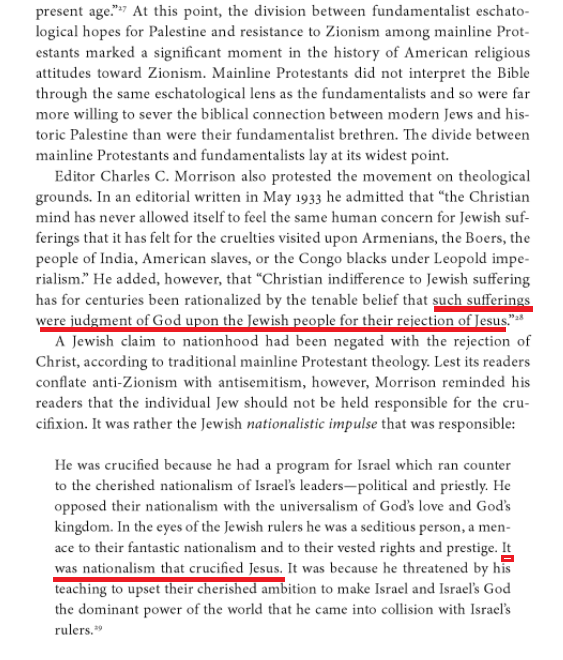 It is obvious that this new reading of the crucifixion was meant to apply to modern Zionism. This is perhaps the first Christian theological argument against Zionism, and it is essentially a modern twist on blaming Jews for deicide – now they were blaming Zionists.

This is an early example of what has become part of today’s accepted discourse, replacing the old, bad antisemitism with the new, progressive anti-Zionism.

This mainstream view changed, in fits and starts, from Kristallnacht and through the Holocaust, to the point that the leading Protestant Zionists had a huge impact on US policy (much to the consternation of the Arabist State Department.)

But before that happened, you will find that the next article I write about the Christian Century is mind-boggling.