It all started with this comment by Jake Tapper, making a comparison between the rhetoric that led to the El Paso massacre and Palestinian incitement to terrorism.

“You hear conservatives all the time — rightly so, in my opinion — talk about the tone set by people in the Arab world. Palestinian leaders talking about, and the way they talk about Israelis, justifying, in the same way you’re doing, no direct link necessarily between what the leader says and the violence against some poor Israeli girl in a pizzeria — but the idea that you’re validating this hatred. You can’t compare the ideology of Hamas with anything else but at the same time, either tone matters or it doesn’t.”

On the one hand, how often do you see the media actually call out Palestinian incitement of hatred against Israelis? Not only that, but Tapper also mentioned in passing the Sbarro Massacre, in which 15 civilians were murdered including 7 children and a pregnant woman, and 130 were wounded on August 9, 2001. The mastermind behind the attack, Ahlam Tamimi, is still given refuge by the Jordanian government, despite US demands that she be turned over to the US per the extradition treaty between the 2 countries.

Tapper’s reference to “some poor Israeli girl in a pizzeria” is a reference to Malka Roth, who had dual US citizenship, on which basis her father Arnold Roth has been pursuing justice for his daughter.

On the other hand, there were those who are unused to seeing such a blunt reference to Palestinian terrorism, and were maybe more accustomed to newspaper headlines that tended to blame Palestinian attacks on the weapons used rather than on the people who wielded them.

Along came Tapper and violated the narrative.

To which Tapper replied: 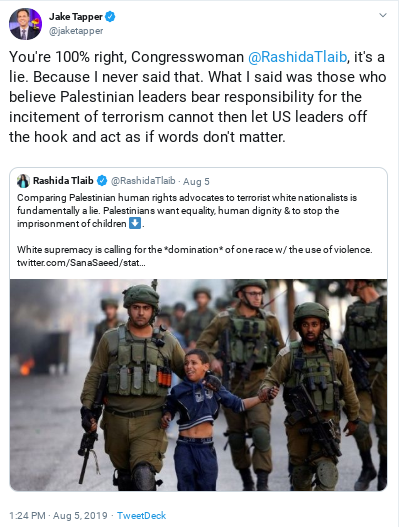 Apparently, Tapper was too polite to ask Tlaib to clarify which Hamas terrorists she considered to be “Palestinian human rights activists.”

Then Linda Sarsour took what these days is considered the next logical step, calling for Tapper to be fired.


We’re teaming up with Jewish Voice For Peace to let CNN President Jeff Zucker know that this kind of casual anti-Arab and Islamophobic bigotry—particularly in the aftermath of an explicitly anti-immigrant mass shooting—is unconscionable.

By inserting Palestinians and Arabs in a conversation about white supremacist violence, Tapper pushed the Islamophobic “terrorist” narrative about Muslims and Arabs that’s been mainstreamed over the past few decades.

Check out this definition of Islamophobia — from CAIR, no less:

Questioning Islam or Muslims is not Islamophobia

It is not appropriate to label all, or even the majority of those, who question Islam and Muslims as Islamophobes. Equally, it is not Islamophobic to denounce crimes committed by individual Muslims or those claiming Islam as a motivation for their actions.

“A critical study of Islam or Muslims is not Islamophobic,” former CAIR Research Director Mohamed Nimer wrote in 2007. “Likewise, a disapproving analysis of American history and government is not anti-American… One can disagree with Islam or with what some Muslims do without having to be hateful.” [emphasis added]

Even if Tlaib and Sarsour do consider the arbitrary killing of unarmed Israeli men, women and children to be in defense of Palestinian human rights, those who disagree with that stand can point to CAIR in support of their right to disagree.

True, CAIR itself refuses to come out and clearly condemn Hamas terrorism, but that is a point for another time.

There is a second issue here — one of a double standard.

We have seen people claim that Jews deflect criticism of Israel by saying that such criticism is in fact antisemitism.  For some reason, those claiming Jews do this tend to forget to give actual examples. But let’s assume for the sake of argument that they are right, that sometimes defenders of Israel label criticism of Israel as antisemitic purely in order to rebuff the argument and avoid having to address it.

Isn’t this what we see happening when critics of actions by Muslims or Muslim countries are accused of being Islamophobic?

Take Jake Tapper as an example.

He is a journalist discussing current events with his guests and addressing the power of inciteful rhetoric. In particular, he compares the way Arab leaders “talk about Israelis” with the kind of heated rhetoric found among White Supremacists.

Does he have to do a comparison of the cartoons of both sides on his show to prove his point?

Are Tlaib and Sarsour so heavily invested in their defense of Palestinian Arabs that they cannot come out and condemn the Palestinian Authority and Hamas the same way Israelis condemn hateful statements and actions by their fellow Israelis?

Instead, Tlaib and Sarsour are upset that Palestinian terrorists get called out and their reaction is to claim “Islamophobia” — and call for Tapper being fired.

Anything to avoid addressing the issue of how Palestinian leaders incite hatred of Israel, and the consequences.

Tapper’s reference to the death of Malki Roth in the terrorist attack on the Sbarro pizzeria also points up an aspect of the Israeli-Palestinian conflict that Sarsour once highlighted — but now ignores.

In a 2011 article on Spectrum News, Sarsour showed then the kind of compassion for Israeli victims that she really does not exhibit today:


Closer to home, Sarsour has worked with an interfaith group called The Dialogue Project, through which she has come to understand those who have suffered on the other side of the Israeli-Palestinian conflict.

“Her name was Robin, and her son died in one of the suicide bombings in a café,” says Sarsour. “And I never got to meet a person like that, and obviously I’m a mother so just hearing and seeing the emotions of someone who lost their child, obviously I wouldn’t want that to happen to anyone, so it made me go home and kind of more look at this not from a political place, but look at — there’s human beings being affected by this, too, and I never had that opportunity to really look at that.”

These days, Sarsour is all about that political place.

These days, Linda Sarsour could easily show the kind of compassion that she briefly demonstrated back in 2011. She has made a conscious decision not to. Apparently, that does not fit the persona Sarsour feels the need to project.

That may have something to do with a grudge Sarsour holds against Israel. From that same 2011 article:


She’s been plagued by a 2004 article that’s been circulating around the internet, an article Sarsour says is untrue.

It claims that at the time, she had family members in Israeli jails with ties to Hamas.

“I can’t deny that people related to me have been in Israeli prison,” says Sarsour. “Does that mean that any of them were charged with crimes or they are terrorists or potential suicide bombers? Absolutely not. This is just the reality of Palestinians living under military occupation.”

Sarsour is not the first to want you to believe that Israel puts Arabs in prison for no reason. And it does suggest an additional motivation to her animus to Israel.

Jake Tapper’s comment provided the opportunity to speak out honestly about Palestinian terrorism and where it is taking Palestinian Arabs.

Tlaib and Sarsour rushed to make sure that such honesty and introspection was nipped in the bud.

A week after Tapper’s comment, the Palestinian Authority was called upon to account for hate speech and antisemitism in its official statements and in its textbooks during their very first review by the UN Committee on the Elimination of Racial Discrimination in Geneva on Tuesday.

Could this be the first hints of Palestinian accountability?