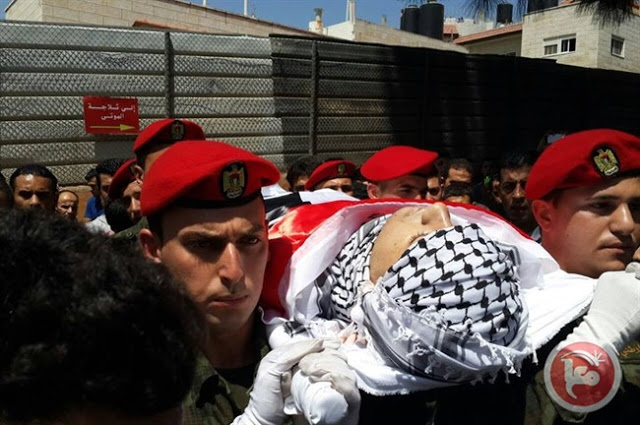 Ma’an News published  “the story of a martyr” in which a teenager who decided to die while attacking Israeli police two years ago is described in poetic terms filled with antisemitism. It was written by a friend of his.

It was his dream to become a lawyer one day, so he can defend his cause and his homeland Palestine, and he loved life and studied to be an Oud player, with a vivid and lively smile…

On Friday, July 31st, Laith awoke with his family to eat breakfast together, as usual, and heard the shocking news in  Palestine, of a baby that was burned by  the hands of the lowly monkeys.  He addressed his mother saying: “Why did they burn him?

Two tears fell from Laith’s eye to announce the death of an innocent child inside him and the birth of a brave man.

Al-Laith went with  his father and his brother to pray Friday,  and after the prayer they returned home, the sorrow and hatred filled his heart  and hatred of the pigs and monkeys had reached its peak, as he opened his account on the social networking sites, and published a picture of the burning of Dawabsha, Sometimes thoughts come to him like arrows…What can he do? Every day the enemy shames women, kills children and humiliates the elderly. Laith realized here that the hour had come to take revenge for every Palestinian. His mind did not cease to fantasize like a united fist.

He and his friends went to the Atara checkpoint north of Ramallah. He came out of the house angrily and echoed his words: “I am not afraid of the bullet. Come, let me be a martyr.” “We must burn them like they burned the baby.” …The last stone he threw after a crack inside him the voice of crying for him and his mother and his father and his brother Ahmada , “God bless you for the baby to me.”

A few seconds later, with the sound of bullets, a soldier fired his treacherous shot. Laith greeted it with an open chest and with all his heart, …pounding the chrysanthemums in his chest
.
It was said to be a butterfly shot, any label that assassinated the beautiful tomorrow as the butterfly !!! The earth is saturated with it until it is plucked, and from it the flowers were drawn to her, and green fields were opened on that holy body.

.. O Laith, the most beautiful story I have ever heard in my life, the legend that will shine in our veins and will remain on the banks of our pains, the flower of Jasmine will still embrace the strings of the warm sun, and will not forget your gift on the teeth of a child like lion, The sky of the camp, its crescent overlooking its land, its walls painted with pain, everything in existence will miss you. The sun, and the color of your skin, was painted in a color of freedom.

If this is not encouragement for young Palestinians to become “martyrs,” I don’t know what is.
Yet Ma’an keeps getting funded by European NGOs and governments.