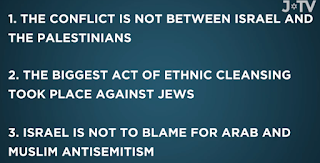 A new Youtube video puts Mizrahi Jews at the centre of reframing the debate about Israel.

Lyn Julius, a journalist and author of Uprooted, demolishes eight common propaganda myths. She says context must be restored to the way the conflict is perceived. More Jews than Palestinians became refugees and they lost more in seized land and property. Forces in the Arab and Muslim world were allied with the Nazis. The distinction between Zionism and Judaism is spurious, she argues. Historically, Jews were subject to a form of Muslim colonialism called ‘dhimmitude.’

The video, produced by J-TV,  has so far drawn more than 500 views.