While many Jews were offline for a few days due to Rosh Hashanah, Valerie Plame Wilson – a former CIA operative who became a best-selling author after her cover was blown – got caught sharing a blatantly antisemitic article on Twitter. Even though the article’s title “America’s Jews Are Driving America’s Wars” was a bit of a give-away, Plame Wilson at first doubled down when she was criticized for sharing the piece: she claimed to be “of Jewish decent” and explained that she was simply motivated by her support for the “Iran nuclear treaty” and her opposition to “war with Iran.” She urged her critics to read “the entire article” and to “put aside your biases and think clearly.”
So presumably, Plame Wilson herself had read the entire article and found nothing wrong with it. Among the points offered in the piece she recommended so warmly was the suggestion that some American Jewish commentators should be treated like rat poison in the US media:
“For those American Jews who lack any shred of integrity, the media should be required to label them at the bottom of the television screen whenever they pop up, e.g. Bill Kristol is ‘Jewish and an outspoken supporter of the state of Israel.’ That would be kind-of-like a warning label on a bottle of rat poison – translating roughly as ‘ingest even the tiniest little dosage of the nonsense spewed by Bill Kristol at your own peril.’”
It quickly turned out that this was not the first time Plame Wilson had shared articles from this website and this author – including one that claimed Israelis were celebrating after the 9/11 terrorist attacks and one that was entitled “Why I Still Dislike Israel.”
If you want to catch up on the details of the story and look at some of the tweets, see e.g. this report at The Times of Israel and the comment by Alan Dershowitz in The Algemeiner.
By now, the article Plame Wilson shared is adorned with an update informing readers that the author “was fired over the phone by The American Conservative, where he had been a regular contributor for fourteen years.”
On her Twitter page, Plame Wilson has just pinned a tweet that includes a thread offering a detailed explanation of her regrets:
“On Thursday, I shared a deeply offensive article on Twitter. The anti-Semitic tropes in the piece are vile and I do not, nor ever have, endorsed them. I regret adding to the already chaotic and sometimes hate-filled conversation on social media. In the past, I have also carelessly retweeted articles from this same site, the Unz Review, without closely examining content and authors. Now that I have, I am horrified and ashamed. The white supremacist and anti-Semitic propaganda espoused by this website is disgusting and I strongly condemn it. It is an affront to human dignity and does not reflect my values. I unequivocally oppose anti-Semitism and prejudice in every form. I believe we all have a moral responsibility to speak out when we see injustice and racism. Although I have strong opinions on public policy matters, going forward I will endeavor to avoid resorting to stereotypes to express my positions and ensure my arguments are grounded in facts. While intending to underscore the madness around those fanning flames of war w/ Iran and their efforts to kill the Iran nuclear deal I made a grave mistake and am deeply sorry for perpetuating any conversation that gives credence to anti-Semitism. Actions have consequences, and while I have been honored to serve on the board of the Ploughshares Fund to avoid detracting from their mission, I have resigned. I take full responsibility for my thoughtless and hurtful actions, and there are no excuses for what I did.” 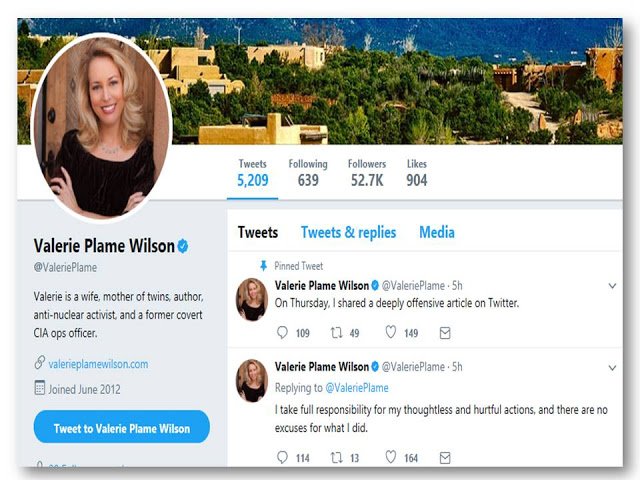 Well, better late than never, I suppose – though it is infinitely depressing to think that a former CIA operative, i.e. someone presumably trained to evaluate information critically, could fall for the Unz Review – which after all advertises itself as “An Alternative Media Selection: A Collection of Interesting, Important, and Controversial Perspectives Largely Excluded from the American Mainstream Media.” I would also have thought that for someone who is supposedly interested in news and politics, it should take just a glance at the contributors and offerings of the site to realize that something is fishy.
The Anti-Defamation League has described Unz cautiously as a “Controversial Writer and Funder of Anti-Israel Activists,” but the entry illustrates well that the sites and people supported by Unz provide a veritable intersectionality study of right- and left-wing antisemitism.
Last but not least, it’s also worthwhile pondering Omri Ceren’s view that Plame Wilson simply said “what many advocates of Obama’s realignment with Iran believe” and that her original tweet linking to the article from Unz’s website was therefore just “an increasingly routine attack on Jews mainstreamed by Obama admin & its echo chamber to sell the Iran deal.” Omri’s thread includes many relevant examples; one could arguably add a recent tweet from the influential Swedish politician and former EU and UN official Carl Bildt, who told his 650K Twitter followers: “Egged on by Netanyahu it seems Trump wants to take the US into a region-wide war with Iran. Europe will suffer. Everyone will lose.” 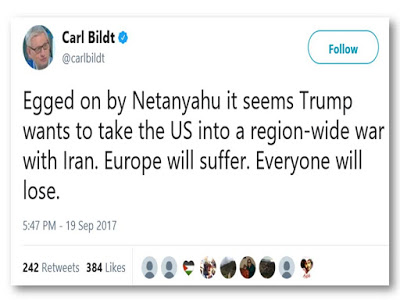 Maybe Bildt could write an article about it for Unz???