The primary goal of every true refugee organization is to repatriate the refugees to their homes. If that is not possible, the refugees should go where they are most likely to thrive, preferably a place with a similar culture that welcomes them.

But when Israel announced a plan to pay illegal African migrants to voluntarily go to Rwanda, to alleviate the very serious problems that plague certain sections of Tel Aviv that are overrun with them, self-righteous American Jews object.

As always, the fake concern for anyone that can be considered victims of Israeli policy came from Haaretz:

Israel will pay the Rwandan government $5,000 for every African asylum seeker it accepts from Israel, Channel 10 reported Sunday. A senior government official confirmed the report to Haaretz.

The Israeli government will additionally continue to pay asylum seekers who voluntarily leave the country a grant of $3,500, as well as the cost of their airlines tickets out of the country. The agreement with Rwanda had not been made public, and it had not been known what Israel was providing in exchange for Rwanda’s agreement to accept the asylum seekers.

Rwandan Foreign Affairs Minister Louise Mushikiwabo said [last] Thursday that Rwanda is ready to accept around 10,000 asylum seekers, or “a bit more,” who are currently living in Israel.

“We have had discussions with Israel on receiving some of the immigrants and asylum seekers from this part of Africa who would be willing to come to Rwanda,” the minister said in an interview with Rwandan English newspaper the New Times. “If they are comfortable to come here, we would be willing to accommodate them. How it’s done and their livelihoods once they are here are details that have not been concluded yet,” the minister said.

The negotiations include how to secure the welfare of around 10,000 refugees, including livelihood, accommodations, and general wellbeing, she said.

Part of the negotiation is to ensure that these illegal immigrants are treated well, and will have housing.

In other words, Israel is aiming to do the most humane thing it can with thousands of people who entered illegally, most of whom did not come as true asylum seekers fleeing from oppression but for economic reasons.

But that’s not good enough for Jeremy Ben Ami and a host of other liberal Jewish “leaders.”

In an open letter and petition to Binyamin Netanyahu, they write “We are concerned that if you move forward with these plans, the lives of thousands of individuals will be put in jeopardy, and the name of the Jewish State and the Jewish People will be irreparably stained.”

Oh, how altruistic of them to worry about Israel’s reputation so they won’t be branded as racists!

Even from the Haaretz article it is clear that Israel is trying to ensure that the Africans are treated well when they return, which admittedly didn’t always happen in the past. But that’s not good enough for these do-gooders:

Please do not deport these individuals who have sought refuge among the Jewish People, but rather let us work together in addressing the burdens and challenges of our moral obligations.

What does that mean? It implies that the thousands of hours that Israel has put into solving this problem are simply a cover for treating human beings like garbage, and these moral paragons can work with Israel on the issue and come up with some undefined solution that would make them happy.

The problem isn’t exactly new. Tell me, Jeremy and the others, what have you done to work with these immigrants? What ideas have you floated that would make everyone happy? Let’s hear your specific plans, not your lecturing. 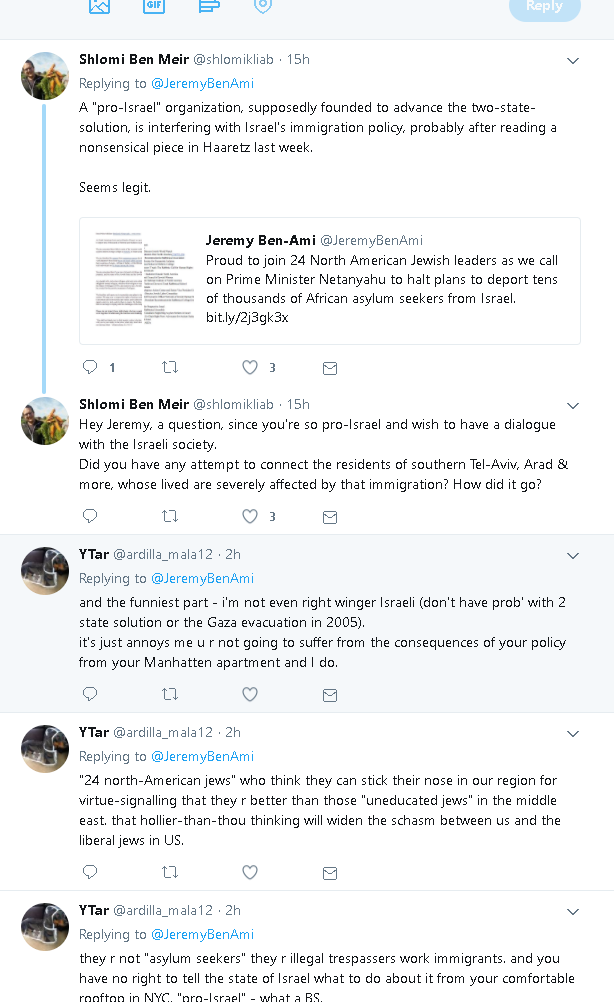