The Jordanian director and actor Ali Elayan has opted to withdraw from the international film entitled “Jaber,” in which he was set to play a Jordanian intelligence officer.

In a statement to Roya and on his Facebook official account, Elayan explained that the film obviously claims that Jews have a right to Palestine and have a historical right to Petra and southern Jordan and that they lived there 1400 years ago.

Elayan pointed out that a group of other Jordanian actors has also decided to withdraw from the film for the same reason, stating that the film will be shot in Amman soon and will be screened in Hollywood, but he gave up on stardom and materialistic temptations for the national sense.

When Elayan was discussing the content of the film with the director, the latter said that these are all historical facts and that it’s normal, as the film will be screened in the U.S., not in the Arab world. He then asked Elayan, “Don’t you believe in these ideas?” Elayan replied, “Of course I don’t.”

The director then told Elayan, “You will no longer be participating in this work.” Elayan replied, “Yes, I am going to withdraw from the film.”

For his part, President of the Jordanian Artists Association, Hussein Khatib has called on all Jordanian actors involved in the film to withdraw because of the fallacies affecting the historical constants, confirming that a number of Jordanian actors have already withdrawn from it.

OK, so what’s really going on?

There are two supposed posters for the film. This one accompanies all the Jordanian stories about the movie: 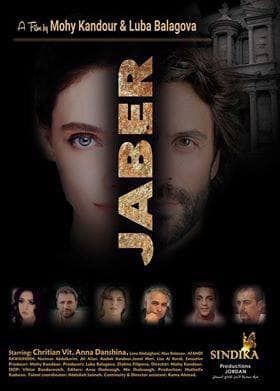 There is another poster in IMDB, for a film in pre-production with the same title, same production company and same director, but completely different tone and different actors. Perhaps Hollywood makes up sample movie posters with their wish list of actors, I don’t know: 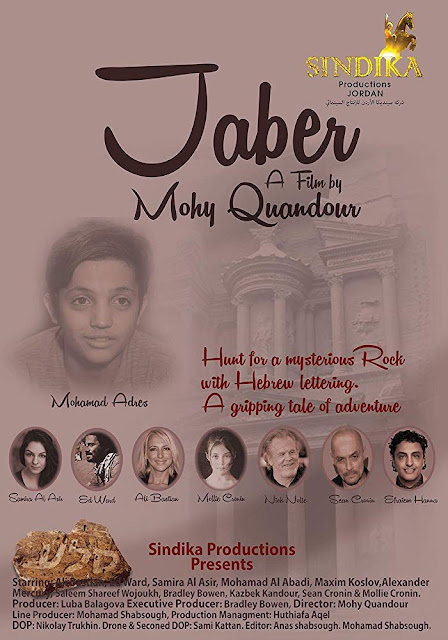 Here’s how the director describes the plot:

During road construction works leading up to Petra in Wadi Musa (Valley of Moses). a peace of Basanite rock with Hebrew lettering is discovered in the rubble by JABER a young 10 year old Bedouin boy. This find leads to a journey of discovery and adventure contradicting the biblical story of the Exodus of Jews with Moses from Egypt. It exemplifies confirmation of a controversial theory written by Dr. Louise Liggins, that Moses welcomed his Jews to Petra instead of mount Sinai where they spent the 40 years before moving on to Palestine. Dr. Liggins’ concept further establishes that Christianity actually began in Jordan and not in Palestine with the baptism of Jesus, at 30 years of age, on the eastern side of the river, thus establishing Jordan as the real Holy land for Christians.
The Rock becomes a valuable artifact pursued by various organizations and governmental agencies, including gangster elements who see in it serious monetary gain. The tenacious boy JABER eludes all pursuers and brings the chase to a surprise ending using his childish instincts to avoid capture.

While the plot is absurd, it in no way makes the claim that Jews have the historic right to Petra. Christians would probably be more offended by this film’s reality than Jordanians.

Either way, it looks like the actor is making himself into a martyr for his own future enrichment by making up these stories about why he is no longer with the film.

But this episode is already bringing up conspiracy theories in Jordan:

During a meeting of the House of Representatives held today, MP Abdullah Akaileh stressed the great danger of allowing the Israeli occupation citizens to own lands and property in Jordan.

For her part, MP Wafaa Bani Mustafa stressed the need to prevent Israeli citizens from owning lands and property in Jordan or even those who hold two nationalities, if one of them is Israeli.

Bani Mustafa pointed out that the Israeli occupation is already planning to dominate lands in Jordan through the “Deal of the Century,” confirming that the film entitled “Jaber,” which will be filmed in Amman soon, is a sign of this plan.

Can they get more paranoid?