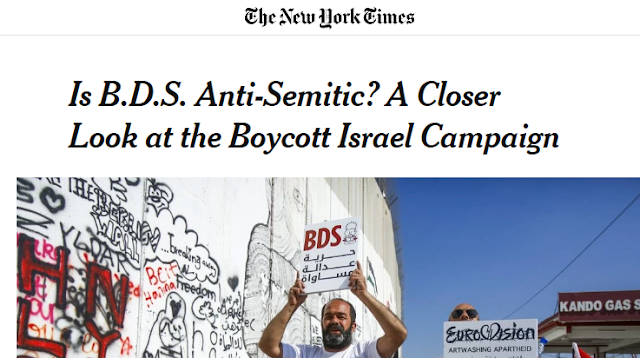 The New York Times published a seemingly even-handed article by its top Israel reporters David M. Halbfinger and Steven Erlanger along with national correspondent Michael Wines asking whether the BDS campaign is antisemitic.

On that specific question, it mentions both sides of the claim without looking at any objective facts:

Leaders of B.D.S. insist that it is not anti-Semitic, and the movement’s umbrella group explicitly rejects anti-Semitism.

But many Israelis and American Jews say it is, using the so-called three-Ds test to distinguish fair criticism of Israel from anti-Semitism: Does the criticism delegitimize Israel, apply a double standard or demonize it?

B.D.S. does all three, its critics say, by questioning Israel’s right to exist, and by singling out Israel for its treatment of Israel’s Arab citizens when minorities in some countries suffer far more. The columnist Ben-Dror Yemini, a critic of the movement, said B.D.S. supporters also demonize Israel when they portray the country as “the great danger to humanity.”

Rebutting the double-standard charge, B.D.S. leaders say that Palestinians fighting for their own rights should not be expected to give equivalent attention to abused minorities elsewhere.  And Kenneth Stern, director of Bard College’s Center for the Study of Hate, urges a distinction between effect and motivation: Palestinians who feel no ill will toward Jews but yearn for self-determination in the land of their forebears may rightly argue that to disparage that yearning is a form of bigotry.

That defense is based on the myth that BDS is a Palestinian-run movement. It isn’t.

It’s origins pre-date the official “BDS Movement call” which lists a hodgepodge of so-called “Palestinian civil society groups” that no one has heard of and many of which are not even Palestinian.

Even the NYT admits that “A host of affiliated groups lead the charge for B.D.S., such as Students for Justice in Palestine and Jewish Voice for Peace in the United States, the Palestine Solidarity Campaign and War on Want in Britain, and the World Council of Churches in Europe.” They, and not the list of trade unions and “civil society” groups that BDS lists, are the people who run BDS.

Meaning that the “3 D’s” test for antisemitism is without a doubt passed by the American and European leaders of the BDS movement. The Palestinians who are supposedly the leaders of BDS all happily consume Israeli products themselves – partially out of necessity but in reality because they don’t want to inconvenience themselves while claiming to support everyone else boycotting Israel.

This NYT article is more disturbing than just parroting BDS talking points uncritically. It mentions Natan Sharansky’s excellent 2005 3-D test for antisemitism as the reason Jews find BDS to be antisemitic, but it ignores the more recent and more comprehensive IHRA definition of antisemitism when asking whether BDS is antisemitic.

By the IHRA standard, it undoubtedly is, as one of its examples of antisemitism are:

–Denying the Jewish people their right to self-determination, e.g., by claiming that the existence of a State of Israel is a racist endeavor.

The NYT proves later that BDS fits this example exactly:

Yes, loudly and proudly. Its founding documents explicitly reject Zionism — the belief in self-determination for the Jewish people in the biblical land of Israel — calling it the “ideological pillar of Israel’s regime of occupation, settler colonialism and apartheid.”

“A Jewish state in Palestine in any shape or form cannot but contravene the basic rights of the indigenous Palestinian population and perpetuate a system of racial discrimination that ought to be opposed categorically,” Mr. Barghouti said.

So why doesn’t this article even mention the IHRA definition, which is the closest thing there is to a universal definition of antisemitism?

Sadly, this crime of omission indicates that the NYT authors subliminally accept the criticisms of the IHRA definition that it demonizes legitimate criticism of Israel, even though it explicitly makes clear it does no such thing.

The New York Times readers deserve to have all the relevant facts in an article entitled “Is BDS Antisemitic?” By not even mentioning the IHRA definition that leaves no room for debate on the topic, the NYT made a decision to consciously make it look like there is a debate to begin with.

Denying the Jewish people’s right to self-determination is antisemitic. The official IHRA working definition says this explicitly, and this is accepted by the vast majority of Jews and any thinking non-Jew.

This article simply ignores the keystone of the argument that BDS is antisemitic.

It is hard to believe that this was not a conscious decision.