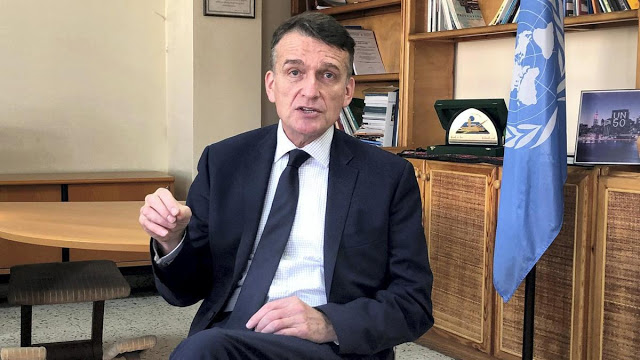 We reported that Israel was pouring millions of dollars into building schools as alternatives to the UNRWA schools in Arab sections of Jerusalem that teach kids to support terror and aspire to be “martyrs.”

UNRWA’s new acting commissioner is not happy with Israel providing “refugee” children with a choice:

[Interim head of UNRWA] Christian Saunders said Israel was seeking to replace United Nations Relief and Works Agency (UNRWA) services for Palestinians in occupied East Jerusalem with those of its own.

He said UNRWA was feeling “the pressure in East Jerusalem in particular”, saying that Israel was in the process of building schools and institutions “to compete” with the agency and stop it from operating there.

“The important thing to remember here is that UNRWA has a mandate from the [UN] General Assembly, from the rest of the world, the member states, to provide services to Palestinian refugees in East Jerusalem,” Saunders said.

The UNRWA mandate does not say that Palestinians cannot choose their own schools! For an agency with budgetary problems, UNRWA should welcome anything that eases its burden – if it was an objective agency tasked with helping Palestinian Arabs. But in fact it is a political organization dedicated to keeping the “refugee” problem festering forever so it can stay in business.

Also, Israeli schools are unlikely to teach students that Israel will be destroyed by their fire and blood. Apparently, this is a problem for UNRWA.

Can Israel shut down UNRWA in Jerusalem completely if it wants?

Right now Israel and UNRWA are operating under a provisional agreement they made in 1967 “which will remain in force until replaced or cancelled.” Which makes it sound like Israel can renegotiate this agreement any time it wants to.

However, Israel’s main limitation is the Convention on the Privileges and Immunities of the United Nations of 13 February 1946, which says that

So it appears that Israel cannot shut down any UNRWA school, but at the same time the UN cannot stop Palestinian Arab parents from sending their kids to Israeli schools if they want.