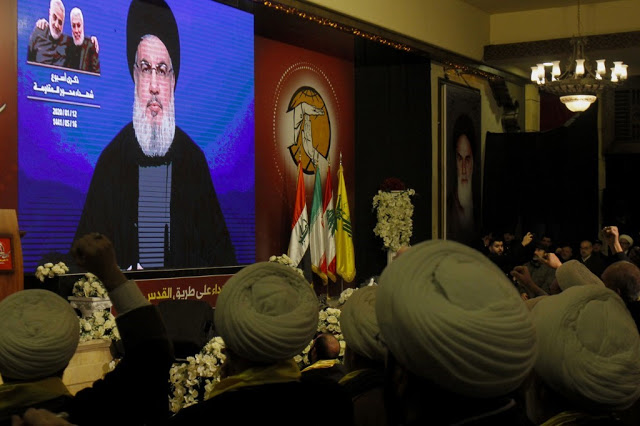 
The leaders of Iranian-backed paramilitary groups  in Iraq have agreed to put their differences aside and back Hadi al-Amiri as the new chairman of the Popular Mobilisation Forces (PMF) as part of a wider plan brokered by Hezbollah leader Hassan Nasrallah to quell tensions between the groups and create a “united resistance” to US troops in the country.

The informal agreement was forged at a meeting convened in Beirut on Thursday after Nasrallah was asked by Iran to organise its Iraqi factions following the assassinations of Iranian general Qassem Soleimani and Abu Mahdi al-Muhandis, the de facto leader of the PMF, in a US drone strike in Baghdad on 3 January.

…Commanders and senior officials within most of the most prominent pro-Iran armed factions, including Asaib Ahl al-Haq, Kataeb Hezbollah, Kataib Jund al-Imam, Kataib Sayyid al-Shuhada and Kataib al-Imam Ali, arrived in Beirut on Thursday in response to Nasrallah’s call for them to “set aside differences” and promote calm in the aftermath of the US strikes.

…The meetings in Beirut sponsored by Nasrallah “were aimed at achieving a truce between these factions,” a commander who attended told MEE.

“Iran asked Nasrallah to play the same role that Soleimani was playing in Iraq until some decisions are made,” the commander said.

So Soleimani’s successor as head of the Quds Force and other Iranian leaders, do not have the popularity and gravitas to deal with these complex internal issues – but Hezbollah’s leader Nasrallah does.

And this is only one of the many things Soleimani was involved with.

This shows that Soleimani was literally irreplaceable given the sheer breadth of things he was involved with. And that Khamenei doesn’t trust his own people to do such a delicate job as this one.

Nasrallah just needs to show himself….