Hasbara Fellowships Canada is demanding that the University of Toronto at Scarborough (UTSC) intervene after its student union (SCSU) voted to eliminate funding for student groups that support Israel.
At its Annual General Meeting (AGM) on Wednesday, Nov. 24, the SCSU passed its second motion in support of the boycott, divestment and sanctions (BDS) movement. A subsection of the original motion passed in 2013 now requires that any kosher food brought to campus must come from an organization that does not support “Israeli apartheid.”
The subsection states that if Jewish students cannot find such an organization, kosher food suppliers that support “Israeli apartheid” shall be granted exemptions.
According to the motion, the SCSU must also “refrain from engaging with organizations, services, or take part in events that further normalize Israeli apartheid.” The SCSU will now mandate that a “BDS List,” which must be “accessible” to all members, is aimed at blacklisting organizations that support the Jewish State.
Gabriela Rosenblum, a Hasbara Fellow at UTSC, harshly condemned the motion at last night’s AGM. “This BDS vote undoes all the critical work done by this student government,” she said. “This motion requires that Jews at UTSC prove that they are ‘good Jews’ in the eyes of the student government, distinct from the many ‘bad Jews’ who support Israel. This motion even defines antisemitism for the Jewish students on campus.”
She continued. “These are hurdles that exist for no other group. It is clear that this motion targets Jews for discrimination. Even for something as simple as ordering jelly donuts for Chanukah, Jewish students at SCSU will now be forced to prove that kosher caterers do not support their Jewish homeland, which is basically impossible.”

The language of the motion is insane. Here is a screenshot from the SCSU November 3 meeting discussing it: 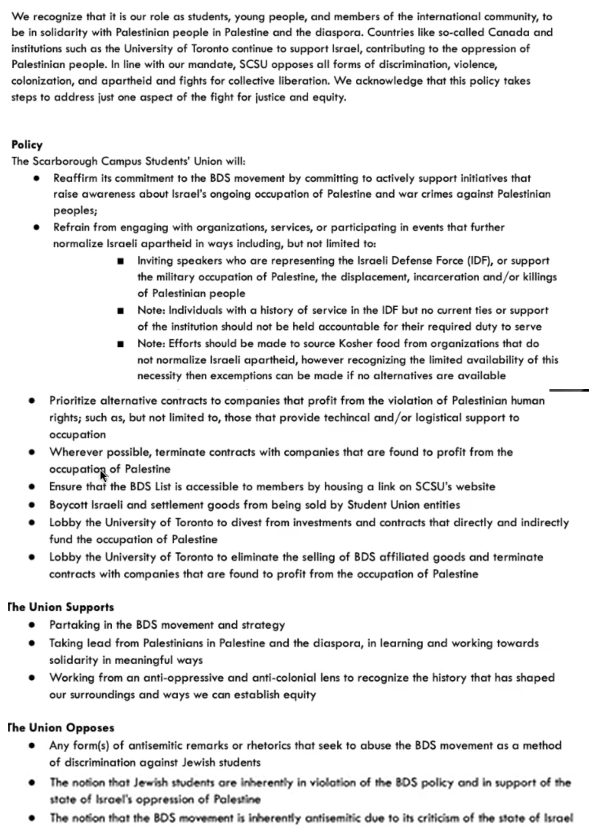 And the motion includes thought control: any students that point out that BDS is targeting Jews and is antisemitic violates the policy itself!

What about Chanukah? After all, it celebrates Jewish sovereignty over  “Palestine” and the “Al Aqsa mosque.” Is celebrating that allowed? Can Jews mourn the destruction of the Temples on Tisha B’Av? Are they allowed to say “Next Year in Jerusalem” on Passover and Yom Kippur? Because all of those can easily be considered “normalizing Israeli apartheid” to the bigots who drafted this obscenity.

As far as the kosher food goes, the BDSers are the ones who would determine if “alternatives are available,” so they can easily tell all Jewish students that they must become vegan to avoid buying meat from companies that are not sufficiently anti-Israel.

Or perhaps the BDSers will ensure that all meats come from Satmar Chassidim.

People who hate Israel will determine which Jewish practices, beliefs, holidays and prayers are acceptable and which are not. Sort of like medieval Christian censorship of the Talmud, updated for campus life.

This is spectacularly antisemitic – and you can be sure that the words of this resolution will now be copied by BSD bigots on other campuses in North America.