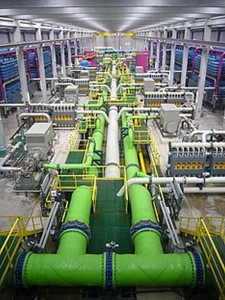 Ashkelon, November 25 – Activists denounced the Jewish state again today over its discriminatory attitudes and policies, in this case over the latter’s refusal to operate a desalination plant just up the coast from where a Hamas-governed territory dumps untreated wastewater into the sea, a refusal that the activists say provides further evidence of Israel’s view of Palestinians as “dirty” or “inferior” and therefore worthy of exploitation.

Representatives of Human Right Watch, Btselem, and others from within Israel, within the Palestinian Territories, and around the world accused Israel today of racism in its handling of the millions of gallons of raw sewage that flows from the Gaza Strip into the Mediterranean, which causes Israel not to operate the desalination plant near this coastal city. The groups called on the international community to pressure Israel into reversing the decision, thereby destroying the plant and depriving its people of drinking water even when the sea remains clean.

“Palestinian sewage is just a pretext for this bigoted behavior,” insisted Omar Shakir of Human Rights Watch. “If anything, Israelis should be drinking that raw sewage regardless of desalination, because I don’t like them and I think they should be made to suffer because of my prejudices.”

A Btselem activist explained that the refusal to desalinate sewage-contaminated water from Gaza goes beyond the mere insult of deeming Palestinian sewage unfit for Israeli consumption. “The hurt is magnified because until Zionism came along, forcing Jews to drink Muslim wastewater, whether figuratively or literally, was the norm in the region,” observed Mashka Biyuv. “The institutionalized power of the Zionist state, embodying as it does the emancipation of Jews from underclass status under Muslim domination, defiantly not taking in Gaza’s wastewater, is a bitter pill to swallow, so to speak. It’s merely the latest manifestation of malignant Zionist arrogance that harms Palestinians.”

Gaza lacks sufficient facilities to process sewage, a situation that human rights activists blame on an Israeli blockade aimed at keeping war materiel from reaching the militants factions that thrive in the territory, and which attack Israel with rockets and other weapons they smuggle into Gaza, or manufacture with imported materials. Those materials include pipes that would otherwise function as components of proper sewage treatment infrastructure, but end up as parts of locally-made rockets. The activists further explained that since the Palestinian leadership sees no problem harming its own people in order to hurt Israel, and international activists such as the BDS movement see no problem in harming Palestinians economically just to pursue symbolic moves against Israel that fail to harm her economically, Israeli must suffer to spare Palestinians from feeling the shame inherent in the diminution of their once-superior status vis-à-vis Jews.