The Tazpit News Agency story, reproduced by The Jewish Press and United With Israel, included the headline “Netanyahu: Israel Will Stay in Judea and Samaria For Ever.” 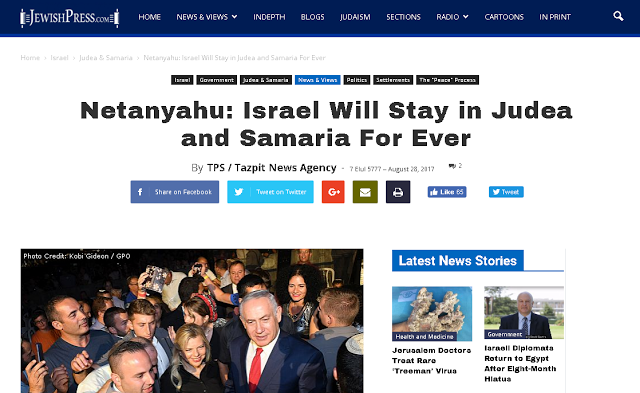 I like a lot of things about Bibi, but in this case he was very careful to use words that would be interpreted by Zionists who support keeping Judea and Samaria the way this headline does.

But it isn’t what he said.

We already know that Bibi has floated the idea of Jewish settlements remaining in place but under Palestinian sovereignty. That is a major part of the peace plan hat is in his head, and what he proposed to John Kerry a couple of years back.

Let’s look at his actual words and see if it is consistent with his proposal to Kerry. Here are Bibi’s words pieced together from Tazpit and Haaretz:

“This is the land of our fathers, this is our land. We are here to stay, forever…There will be no more uprooting of settlements in the land of Israel. It has been proven that it does not help peace. We’ve uprooted settlements. What did we get? We received missiles. It will not happen anymore.”


“And there’s another reasons that we will look after this place, because it looks after us. In light of everything that is occurring around us, we can just imagine the result….From these hills we can see the Land of Israel from one end to the other.

“Imagine that radical Islamic forces were stationed on these hills. That would be a danger not only to us, but to all our neighbors. It would endanger the whole region and the entire Middle East. Given everything that is happening around us, one could only imagine the consequences….So we will not fold. We are guarding Samaria against those who want to uproot us. We will deepen our roots, build, strengthen and settle.”

Israel would insist in any peace plan to maintain security control over the borders even to the Jordan. Israel would still be “guarding” Samaria even if most of it becomes part of another Arab state. Bibi would allow the strengthening of existing settlement blocs near the border and perhaps even add to them, but the settlements that are deeper inside the territories would not be under Israeli sovereignty.

Netanyahu is a politician, and a master communicator. Here is he giving one impression but he is saying something quite different, knowing that his audience would not consider the other interpretation. I wish he really did mean that Israel would hold on to every Jewish community in Judea and Samaria – but he didn’t say that (unless there are other parts of the speech I missed.)

What is more concerning is that until I read this carefully wordsmithed speech, I entertained the idea that Bibi’s insistence on allowing Jewish communities to stay intact under Arab rule was a bluff meant to expose the antisemitism inherent in the Palestinian leadership, as they would never accept the presence of Jewish communities. But when Bibi can’t be explicit in holding onto all the settlements in a speech to settlers, it means that he really does want to transfer at least some Jewish communities to the Arabs, in the interests of territorial contiguity and the difficulty to protect the Jews in those communities as islands in an Arab sea.

I hope I’m wrong. But the matter could be cleared up in seconds if someone asks him about it in the Knesset.