With all the press given over the Temple Mount, people tend to forget that the Palestinian Authority (and the Muslim world as a whole) is just as adamant that Jews do not have the right to pray or even be outside the Temple Mount as well.

The Palestinian Authority  Minister of Waqf and Religious Affairs, Sheikh Yusuf Adais,  issued a statement yesterday on “Zionist attacks” of the “Al Aqsa Mosque” during August. Some of these “attacks” include:

– Likud MK Yehuda Glick set up a symbolic office outside one of the gates of the Temple Mount. He sat in a chair.

– Israel continues to allow archaeological research outside the Temple Mount (such as in the City of David.)

– “Thousands of settlers performed the Talmudic rituals at the Wall of Al-Buraq” – meaning thousands of Jews went to the Western Wall to commemorate Tisha B’Av, the anniversary of the destruction of the Temple 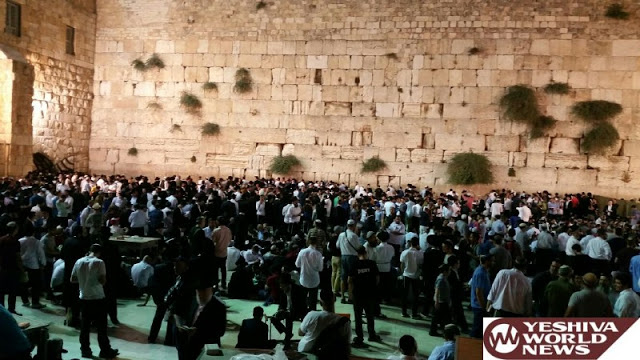 All of these “desecrations” are just as upsetting to the Palestinian Authority as Jews calmly walking around the Temple Mount, what they call “storming Al Aqsa.”

In other words, when Israel is pressured to compromise on any part of Jerusalem or the Land of Israel, its “peace partner” will go just as crazy and incite just as much terror as they insist on the next part. If Israel withdraws from territory, they ask for more. If Israel gives up all the West Bank, they would ask for more. We saw it in Lebanon when Israel left every square centimeter according to the UN – and Hezbollah made up excuses to continue to “resist.”

This is a long game, and the West simply doesn’t understand any mentality that goes beyond an election cycle. The Palestinians might pretend to negotiate for short term gains but they never give up on their objective of taking over all of Israel. After all, that’s the entire reason for insisting on the “right of return.”

And when a PA minister lists Jews paying at the Kotel as a “violation of Al Aqsa,” the real outrage is that no one is reporting on what reveals the true Palestinian position, that Jews simply don’t belong in Jerusalem altogether.

Here’s a video apparently of Tuesday’s walk by Glick and others that caused so much anger in Palestinian and other Arab media. (The video may actually be older, it was seemingly posted on YouTube on Monday but that might be a time zone issue.)