The UN Office for the Coordination of Humanitarian affairs keeps track of deaths and injuries of Israelis and Palestinians in a biweekly report.

It shows that the number of Israelis injured in Palestinian terror attacks is significantly up this year compared to last, and the year still has over three months to go. (There were five injuries during the reporting period.) 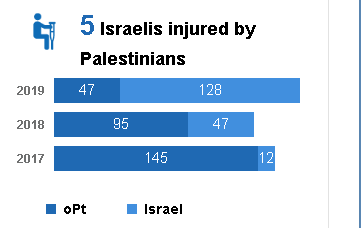 Notice also the flip in where the attacks occur: in 2017, over 90% were in the territories, while this year some 75% of the injuries from terror attacks are within the Green Line.
Similarly, the number of those killed this year according to OCHA have been mostly within the Green Line as opposed to recent years: 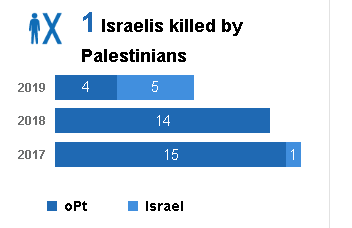 The main reason for the increase in deaths and injuries within the Green Line is the barrage of 700 rockets shot in May from Gaza.

These statistics do not include IDF soldiers stabbed, run over and shot.