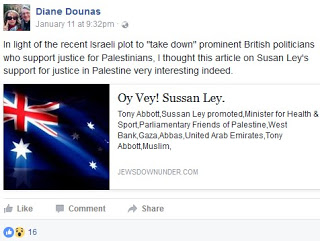 Remember the British MPs’ great expenses scandal some years ago?

A punk afficionado who as “a high school student in Canberra in the 1970s … walked around with no shoes, black lipstick, spiky purple hair, a dog collar, and a nose piercing connected to the razor blade in her ear,”  Ms Ley’s addition of a superfluous consonant to her given name (invoking for most Aussies the name of a ubiquitous chain of women’s wear stores) was apparently a numerology thing.

Before being given ministerial office by former prime minister Tony Abbott, she was one of the most outspoken pro-Palestinian politicians in Canberra, chair, no less, of Parliamentary Friends of Palestine.  (Hence the reaction of anti-Zionist conspiracy theorists, seen in these images, to her recent downfall!)


“When she was just a baby, her family moved [from Nigeria] to the United Arab Emirates where her father was attached to British intelligence. She attended school there until she was 10 and was then sent to boarding school in England while her parents remained in the UAE.”


“I wish to let the House know that I have this week taken on the task of chairing this parliament’s Friends of Palestine group. I pay tribute to the previous chair, the member for Parramatta [Ross Cameron, who established it in 1999 with former National Party leader Tim Fischer as then chairman], for his leadership of the group and the way he has consistently promoted friendship from us, as parliamentarians, towards the Palestinian people.

My involvement in this issue comes from my upbringing in the Middle East and the keen interest in its history and future I acquired then and still have today. As a child I lived in Qatar and the Emirates and grew up knowing the Arabs as open, friendly and generous…”

In 2011 she was one of four female federal parliamentarians who went on a “study tour” of “Palestine” (the others were Jill Hall, Melissa Parke, and Maria Vamvakinou).


‘Palestinians and their President Mahmoud Abbas have reaffirmed their commitment to peace and their readiness for statehood…. As articulated in UN Resolutions, the vision of a peaceful settlement to the Palestine question  is met with the reality that “it has been more than sixty years since the adoption of resolution 181 (II) of 1947, and more than forty years since the occupation of Palestinian [sic] territories, including East Jerusalem, in 1967.”….’

As federal MP Michael Danby observed the day after a speech Ms Ley made in the House following that visit, she described her visit to Israel as “ten days in the occupied West Bank.”


‘Ms Ley met with leaders of the Palestinian Authority, but did not meet any representatives of Israel, leaders, members of the Knesset or diplomats.

She did meet critics of Israeli society – the Israeli Soldiers group-Breaking the silence, and paid tribute to another group of Palestine supporters she described as,“the amazing Rabbi’s for Human Rights….

A bright future for the two peoples will not come through a unilateral declaration of a Palestinian State with an automatic majority of Muslim and Arab supporters at the United Nations General Assembly.’

In 2014 the splendidly clear-sighted and courageous columnist Andrew Bolt drew attention to the naive remarks Ms Ley had made on the ABC’s Q and A program (Australia’s equivalent to the BBC’s Question Time):


‘As I said yesterday, no more sweet untruths:

I mean well-meaning deceptions like this, from federal frontbencher Sussan Ley:

“…. Islam is a religion of peace. It absolutely is.”

Really? [Journalist] Tim Blair checks into the Lakemba Hotel to visit the Islamic heartland of Australia:

A few weeks ago a large crowd of mostly young men assembled outside the Lakemba Hotel. Waving black flags, the men chanted: “Palestine is Muslim land The solution is Jihad … You can never stop Islam From Australia to al Sham…

… Across the road from the hotel is the Islamic Bookstore… Three books caught my eye. Here’s an extract from Muhammad bin Jamil Zino’s What a Muslim Should Believe, a handy 64-page Q & A guide to the Koran’s instructions:

Question 43: Is it allowed to support and love disbelievers? Answer: No, it is not allowed.

…The History of the Jews seems a bland enough title, but the back cover quotes lines from Martin Luther that were used by Nazi propagandists: “The sun never did shine on a more bloodthirsty and revengeful people as they.” The book offers this view, on page 16: No one can deny the fact that the Jews are the worst kind of barbarian killers the world has ever known!!! The decent great Adolf Hitler of Germany never killed in the manner of the Jews!!! Surely only mad people or those who love killing infants, pregnant women and the infirm will think differently….’

Now that she is no longer bound by the restraints of ministerial office, the unanimity required of Cabinet members on policy issues, it will be interesting to see whether  further “well-meaning deceptions” will come from her lips regarding Israel and the Middle East.