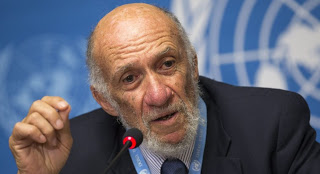 Richard Falk’s report that calls Israel an “apartheid state”, commissioned by UN ESCWA, relies heavily on Israel’s defining itself as a Jewish state as proof that it is discriminatory against non-Jews.


Where a State’s constitutional law provides equal rights to the entire citizenry, it can provide an invaluable resource for people challenging discrimination at all levels of the society. However, if constitutional law defines the State as racial in character — as in Israel (as a Jewish State), and apartheid South Africa (as a white-Afrikaner State) — movements against racial discrimination not only lack this crucial legal resource but find themselves in the far more dangerous position of challenging the regime itself. Such a challenge will naturally be seen by regime authorities as an existential threat and be persecuted accordingly.

Falk is astonishingly dishonest in later quoting Israel’s Declaration of Independence as proof that Israel defines itself as a Jewish state without noting that that same Declaration says that all citizens must have equal rights – and Israel’s Basic Laws refer to the equal rights section of the Declaration, giving it the force of constitutional law.

The report by UN ESCWA believes that the “Jewish state” is inherently discriminatory, rejecting any objections to “the ethnic premise of Jewish statehood [as] illegitimate, because it violates international human rights law.”

Yet how do ESCWA members define themselves?

Here is a chart showing how every ESCWA member defines themselves in their constitutions.

With the exception of Sudan (and to an extent Morocco) every member identifies as either an Arab state, an Islamic state or both, which – by Falk’s logic – means that the nations that sponsored Falk’s report to define Israel as an apartheid state are apartheid states themselves.

Yet no one ever accuses them of that, even though by any sane measure they discriminate against non-Arabs and/or non-Muslims in ways that are far more egregious than anything Israel can be accused of doing.

For example, in Bahrain non-Arabs are extremely limited in where they can lease land, while Arabs have no such restrictions and can buy land outright. Jordan and others have similar laws. Arab League states, which is the majority of ESCWA members, also discriminate against non Arabs in their citizenship laws.

This is only one example of how Falk’s definition of “apartheid” for Israel would apply to many of not most other nations, including the US.

So if you accept that this report proves Israel is an “apartheid state” you must agree that so are many, many other states that also fall under that definition. By manipulating the facts to judge Israel guilty, Falk is not strengthening human rights – he is weakening the definition of apartheid to become meaningless and therefore useless.