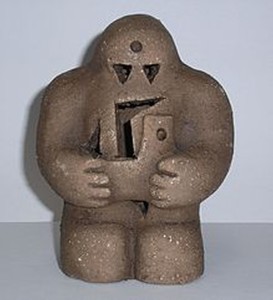 Geneva, October 13 – The United Nations Human Rights Council held a session today on the Prague Jewish community’s use of a golem to defend against massacres by the non-Jewish populace, and voted to condemn the use of such measures as illegally impinging on the rights of those non-Jews to perform the massacres, rapes, and destruction their leaders had exhorted them to perform.
The council voted unanimously on the measure after hearing testimony from local church officials and would-be marauders whose intentions were thwarted by the hulking, powerful presence of the golem. The Sudanese delegate, in particular, argued for stronger language in the resolution that originally proposed by Saudi Arabia, which had merely “denounced” Prague’s Jews.
“After dutifully and enthusiastically acting according to the admonitions of clergy and local gentry, the citizens of Bohemia have been repeatedly frustrated in their efforts to intimidate, oppress, and otherwise abuse the Jews of Prague and its environs,” read the resolution. “The inability of the devoted Bohemian non-Jews to inflict the sought-after damage on the Jewish community directly results from the presence of a so-called golem, created by the leader of the Jews of Prague to keep those non-Jews from carrying out their leaders’ policies. This council finds such short-circuiting of the will of the masses deplorable, and condemns them.”
The statement further called on the Jewish community to cease its use of the golem at once. “Measures to prevent the masses from massacring Jews are the exclusive province of local sovereign authorities, not some rabbi,” read a later section of the resolution, referring to Rabbi Judah Loewe, who is alleged to have created the creature using Jewish mysticism. “The golem must be withdrawn and destroyed at once, on penalty of referral of this case to the Security Council for consideration of sanctions and other punitive actions.”
Representatives of the local clergy expressed satisfaction. “That’ll show those Jews,” boasted Thaddeus, the Bishop of Prague. “I shouldn’t have to frame anyone for the murder of a Christian child and blame it on Jewish ritual murder just to generate enough hostility to incite a massacre – it should be much easier, but the Jews, especially that rabbi, have been making my life difficult from day one. This out to show them their place.”
A member of Prague’s Jewish council voiced bewilderment at the decision, noting that no mention of a golem of Prague is found in any literature until nearly five hundred years after it was supposed to exist.