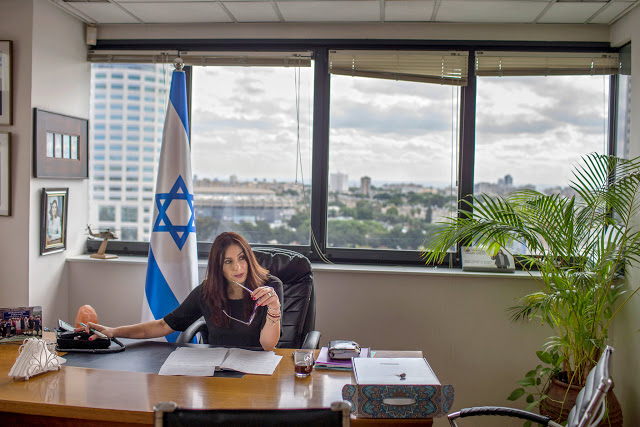 The New York Times Magazine has a skeptical profile of Miri Regev, Israel’s right-wing Minister of Culture and Sport, by Ruth Margalit.

The bias is clear, but this episode in the article blows apart the idea that Israel’s right is anti-Arab:

One evening, I joined Regev for a Ramadan visit to her Arab supporters at a private home in the northern town of Ma’alot-Tarshiha. It was an airless night. An enlarged print of the Dome of the Rock, the holy site in Jerusalem, hung in the entryway. Every table inside the carpeted house was laden with watermelon wedges, puff pastries and silver carafes of black coffee, even though the fast wouldn’t be broken for another couple of hours. Regev was the guest of honor, and a line of men with their young sons formed to greet her and her aides.

She shook each of their hands, hugging the men she recognized and pinching the boys’ cheeks. “They killed you with this heat, huh?” she said. She turned to one of the men, who wore a white button-down shirt. “You look like a groom today! Come, neshama. Join us.” She glanced at the tables, feigning disbelief. “What’s all this food for if you can’t eat?”

“It’s for you,” the host replied warmly.

The atmosphere was festive, but the gathering itself seemed unlikely, surreal even, considering Regev’s past rebukes of Arab lawmakers — “Betrayers! Terrorists!” she fulminated in 2014 — and the fact that Arab Israelis rarely vote for Likud (the party garnered about 1 percent of the Arab vote in the last election). I was told that the evening’s host was a veteran Likudnik — he referred to Regev as being “like family” — but I wondered how many of the other men present actually voted for her.

Then one of the town’s deputy mayors, a genial lawyer named Ayman Shanati, spoke. “I’m not a man of Likud,” he said. But with Regev, “we are seeing real change and a lot of new projects in the Arab sector.” He praised Regev’s reallocation of funds, which has benefited Arab towns much as it has the peripheria and ultra-Orthodox communities, but complained that his town still didn’t meet certain budget criteria.

Regev nodded. “Write it down,” she told an aide.

…She doesn’t see a disconnect between her radical statements against the Palestinians and her attempt to promote Arab culture or woo Arab Israeli voters, many of whom identify as Palestinian. Arab Israelis want to “raise their children in peace,” she says, while members of the Palestinian leadership “sanctify death.” (Arab municipalities are used to such double speak from government ministers but often decide to swallow the insult in order to maintain working relations.)

Why is it double speak? In the next paragraph we see that it isn’t:


She stood up and thanked Shanati. “The cultural revolution that I am leading is to give voice to the Arab sector,” she said at a volume more suitable for a conference hall. “My office is your home. Every problem, every issue.” Yet earlier she ventured a qualifier by way of hyperbole: “Whoever is loyal to the state, we’ll bring him the moon.”

Regev is not being hypocritical – she is being entirely consistent. Arab-Israelis deserve to be treated better and she is working to do so. Arabs – and Jews – who are disloyal do not deserve automatic funding for anti-Israel plays, poetry and films. It isn’t a “right” and refusing to fund such art is not censorship.

Similarly, loyal Arabs and Jews whose voices have been stifled by the left-wing Ashkenazic artistic elite should be supported. The state does not have the responsibility to support art that tries to undermine its very foundation, whether it is from the Arab or Jewish sectors.

There is no anti-Arab bias whatsoever, but Margalit is so wedded to the idea that Regev is a racist that she cannot see the distinction that she herself reports.

The only bias here is from the reporter.