TOP NEWS
http://jewishrefugees.blogspot.com/2020/10/uae-brokered-possible-yemen-israel-deal.html
Two classified documents have revealed that the United Arab Emirates (UAE) played a key role in urging Yemen to formally normalise relations with Israel 16 years ago. That ship sailed some time ago, with the outbreak of civil war and the brutal repression of Yemen’s remnant Jewish community. The Aden Jewish cemetery is being razed for urban development . MEMO has the story: 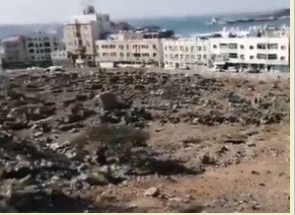 The first document issued on 3 March, 2004, was a letter sent from the Emirati Ambassador to Yemen at the time Hamad Saeed Al-Zaabi, to the UAE under-secretary of the Ministry of Foreign Affairs. The letter stated that a delegation from the Jewish Heritage Authority had recently visited Yemen and met with several officials including President Ali Abdullah Saleh, Lebanese newspaper Al-Akhbar reported.
According to the pro-Hezbollah newspaper, the delegation included Israeli Yahya Marji and Ibrahim Yahya Yacoub, a US citizen, as part of Zionist efforts to normalise relations between the Jewish state and Yemen. The delegation made several requests to Yemeni officials, including the construction of a museum of Jewish heritage in Sanaa and fencing the tomb of Al-Shabazi (one of the rabbis of the Jews of Taiz) and the Jewish cemeteries in Aden, Rada’a and the different regions where Jews lived.
Requests were also made to grant naturalisation to 45,000 Israeli Jews and 15,000 Jewish Americans, and to build a temple and a Jewish school in Raydah. According to the Emirati ambassador: “The Jewish Heritage Authority sent a letter to the Yemeni prime minister to request the construction of the museum, while outlining the importance and reasons behind the request.”
Read article in full