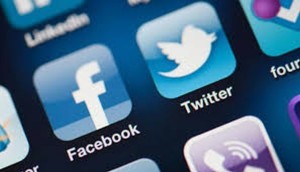 San Francisco, October 18 – Heavenly enforcers raked with identifying and tracking blasphemy have had a much easier time since social media platforms began alerting users when others mention them in posts, a divine spokesangel stated today.
Speaking to journalists outside the Twitter offices, Archangel Michael told reporters this afternoon that thanks to Twitter and Facebook Notifications features, the detection of online blasphemy, use of God’s name in vain, and sundry other rhetorical sins has seen a remarkable jump in efficiency in the last ten years.
“It used to be much more tedious, but at least in the online realm the detection of blasphemy has become more or less instantaneous,” explained the archangel. “Twitter’s notifications alert Heaven whenever God is invoked, and our enforcement division can immediately review the content of the tweet to determine whether any speech against Him has been committed.” Those who retweet or share blasphemous content are similarly identified and investigated, but those who merely “Like” a tweet are considered as having performed no action at all.
Michael lauded Twitter for its quick action on enabling the feature, but withheld full-throated praise from other social media platforms such as Facebook. “We salute Jack Dorsey and his team for facilitating this welcome development,” he pronounced. “Other companies in the arena would do well to follow suit, and not force their users to suffer through unreliable alert systems and overlapping or repetitive notifications.”
The angel declined to divulge the number of blasphemy incidents detected since Twitter implemented notifications for mentions, but did indicate that fewer of the cases than one might expect would result in capital punishment. “I’m not at liberty to say how often a blasphemer receives judgment, but I can reveal that when most people think they are cursing God they are actually cursing their own misconstrued, flawed version of God, and not God Himself,” he observed. “This often constitutes grounds for leniency, and lies behind the apparent discrepancy between the number of people who bad-mouth the Creator and those who get what’s coming to them as a result.”
Divine opinion has yet to coalesce regarding other Twitter features, such as the experimental new expansion to a 280-character format, but the Heavenly spokesangel hinted at a measure of Godly displeasure. “God created all of physical existence with just a few utterances,” he noted. “Since then, divine communication has occurred infrequently, and not always in verbal form. A wise consideration of these facts should lead one to conclude that more words are not always better.”