TOP NEWS
http://elderofziyon.blogspot.com/2017/10/saeb-erekats-transplant-breathing-easy.html
Chief PA peace negotiator and Secretary General of the PLO executive committee Saeb Erekat underwent a successful lung transplant in northern Virginia on Friday. There is no doubt that Erekat needed that lung. He was in such bad shape from pulmonary fibrosis that he was on oxygen and could no longer walk.
Erekat was diagnosed some five years ago and had been receiving treatment in Israel. There isn’t any decent hospital in PA or Hamas administered territories where he might have been treated or received a transplant because the Arabs use much of their considerable foreign aid on things like schoolbooks that teach their children to kill Jews; stipends to Jew-murdering terrorists and their families; and terror tunnels used to infiltrate Israeli territory in order to kill Jews and for transporting items to be used to kill Jews. That is, instead of spending that aid on building hospitals and providing decent medical care to their people.
Once the doctors determined that Erekat needed a lung transplant or it was goodbye Saeb, he didn’t have much choice but to look elsewhere for a transplant. According to Israeli policy, non-Israeli citizens can’t be placed on the transplant list. They can be considered only after it is decided that a donated organ is not suitable for any of the Israeli citizen on the waiting list. Note that an Israeli Arab would have the same chance as an Israeli Jew in being considered for an organ transplant.
It’s not that Erekat is an Arab or a Muslim, it’s that he’s not a citizen of Israel.
An LA Times article notes:

Eighty-nine Israelis are on the waiting list for a lung transplant, said Dr. Tamar Ashkenazi, director of the transplant center at Israel’s Ministry of Health. Last year, 50 patients received donated lungs.
Ashkenazi said that in the event an available organ has no match in Israel, she will reach out to the deceased’s family and request special permission, above and beyond the legal necessity, to offer the organ to foreigners. Under similar circumstances, she once sent a child’s liver to Germany.
Erekat, who is of average height, suffers yet another disadvantage.
“I have no idea why, but we have many tall donors here,” Ashkenazi said, noting that height is a crucial factor for matching lungs. “A tall patient might wait two weeks, and a shorter person can wait two years.”

The New York Times quotes David Bitan, Israeli coalition whip for the Likud Party: “I am for humanitarian aid, but there is a problem with lung transplants. We can barely manage lung transplants for the citizens of the State of Israel.”
Israel National News makes it clear that the list for organ transplant is ordered according to medical criteria, quoting a joint Facebook statement from Israel’s Ministry of health and its National Transplant Center:
“In cases where no Israeli patient is found to receive the organ, it is possible to transplant the donated organ to a non-resident of Israel, subject to the consent of the donor’s family, in coordination with the transplant center. Such cases are extremely rare.”
It makes sense then, that Erekat decided to do what needed to be done to get on the waiting list for a lung Stateside. It is also interesting that he received a lung in the States within two short months of us reading about his need for a transplant. As of October 12, there were 1,374 people on the U.S. wait list for a lung. 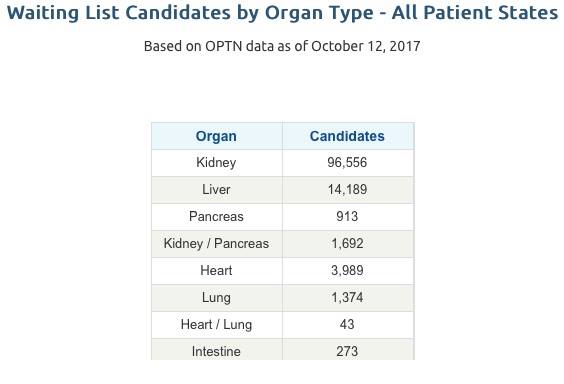 The United Network for Organ Sharing (UNOS) website says that “geography plays a part” in moving to the top of the list:
There are 58 local donor service areas and 11 UNOS regions that are used for U.S. organ allocation. Hearts and lungs have less time to be transplanted, so we use a radius from the donor hospital instead of regions when allocating those organs.
The website also helpfully tells us how long each organ remains viable for transplantation after donation:
Kidneys 24-36 hours, pancreas 12-18 hours, liver 8-12 hours, heart/lung 4-6 hours.
In other words, you have to be close by to move to the top of the waiting list to get a lung, because you’ve got, at most, 6 hours to get that transplant. You have to be close to the donor hospital.
At the same time, the UNOS websitetells visitors that there’s no preferential treatment involved in rising to the top of the transplant list:
Only medical and logistical factors are used in organ matching. Personal or social characteristics such as celebrity status, income or insurance coverage play no role in transplant priority.
Before he got so sick, Erekat was often interviewed by the Western media. He used these opportunities to accuse Israel of state-sponsored apartheid, genocide, and war crimes. In 2014, for example, he told Galei Tzahal (IDF Radio) that the Israeli response to the kidnapping and brutal murder of three Israeli teenagers followed by scores of rocket attacks on Israeli towns, constituted “genocide.”
“96% of those killed in the (Gaza) Strip were citizens, and tens of thousands of homes were destroyed. I know Israelis protest against the use of the term ‘genocide,’ but that’s the reality on the ground.”
Never mind that Hamas was using human shields, placing rocket launchers in, for instance, homes and nursery schools.
In 2013, Erekat accused Israel of apartheid. “Today in the West Bank, including East Jerusalem … I can sum up the situation with one word—apartheid. Worse than that which existed in South Africa. Today Israel justifies its apartheid by the term security.”
Referring to his hopes for John Kerry’s (doomed-to-failure) mediation efforts and for statehood, Erekat said, “we are going deeper into the evil apartheid that exists in the West Bank and East Jerusalem.”
Why does any of this matter now? According to Arab Israeli journalist Khaled Abu Toameh, Saeb Erekat is a frontrunner to replace Abbas on retirement. From the same LA Times article cited above,

“In recent years his position has gotten a lot stronger,” Abu Toameh said. “He’s become the leading candidate to replace Abu Mazen,” another name for Palestinian Authority President Mahmoud Abbas, 82. “Among Palestinians he is considered the most prominent symbol of the Oslo process, and he’s taken a lot of flak for being the flag bearer of ongoing negotiations and contacts with Israel.”

Saeb Erekat has been saved from an untimely death. Whether the short waiting time for a lung was coincidence, luck, or something else, it’s impossible to say. But having earned a second chance at life, Erekat may end up making a return to the political stage, as well.
Hat tip to reader Evan Parke for planting the seed and for research help.