Leaders Erdogan and Netanyahu, both facing imminent elections,  have repeatedly traded verbal insults recently. However,  a familiar pattern has emerged in Turkey of the government using incitement and threats against the local Jewish community in order to score domestic political points.  The result? Physical violence against Turkish Jews may not be far off, predicts Michael Rubin in the Washington Examiner. They should leave. 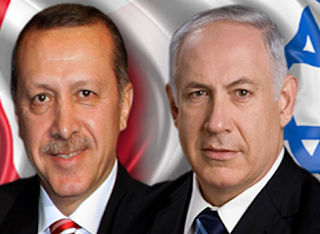 “Do not provoke,” Erdogan said, before noting that he had not yet taken any action against Turkish Jews or their houses of worship. This is, of course, not the first Turkish government threat against its Jewish community. A decade ago, then-Foreign Minister Ali Babacan privately told Turkish Jewish leaders that if the U.S. Congress passed a resolution condemning the Armenian genocide, Erdogan’s government would feel no obligation from preventing Islamist mobs from attacking Turkish synagogues.

It may not have happened yet, but it will, and soon. It is true that Turkey, and the Ottoman Empire before it, has been more hospitable to Jews than many European and Arab countries. Jews received refuge in Ottoman domains upon their 15th century expulsion from Spain, and they remained generally welcome for centuries after. One of the reasons successive Turkish governments have welcomed and protected the Jewish community has been that Jews in Palestine were one of the few Ottoman groups which did not rise in rebellion against Istanbul. Greeks, Armenians, Bulgarians, Arabs, Egyptians, Syrians, and Serbs, on the other hand, all did. As for the Kurds, they of course rose up repeatedly after Turkish independence, and still do.

But early in his reign, Erdogan discovered that anti-Semitic incitement was a powerful political tool. For that matter, the same was long true for his ally-turned-rival Fethullah Gulen, although as Gulen has been targeted by Erdogan, he has had a change of heart.

The Erdogan years have been scary for Turkish Jews. The Turkish leader and his top aides have regularly peddled in anti-Semitic conspiracy theories. Wikileaks? The whole episode was a Jewish plot to embarrass Turkey. The 2013 environmental protests at Gezi Park? Another Jewish plot.