As many as 700 Tunisian Jews could have been murdered in the Nazi Holocaust, a researcher has claimed at a recent conference –  according to HuffPost Maghreb, quoting a report in  Arutz Sheva.  (It is not clear if this figure includes Tunisian Jews who were living in Europe – some 2,000 Jews born in Arab or Muslim lands died in Nazi death camps.) 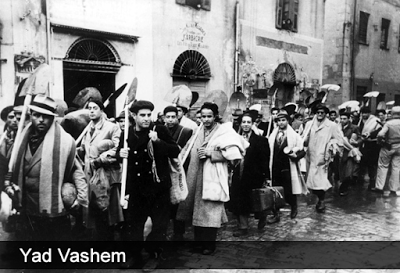 According to Victor Hayoun, nearly 700 Tunisian Jews died. The study was presented at a conference titled “From Tunis to Djerba”, held at the Dahan Center at Bar Ilan University, Israel.

“When I realized that there was no scientific research on the Holocaust of the Jews of Tunisia, I decided to raise the issue and I have been working on it for about 12 years. We are talking about 700 members of the community, “said Hayoun. He added: “Until 2006, we knew only 400 victims of Tunisian origin and in 2012, we knew 488. Today, we know that the number is closer to 700.”

According to Hayoun, Yad Vashem, Israel’s national museum of the Holocaust also has incomplete figures since it estimates that the number of victims among the Tunisian Jews was 50. This figure corresponds to the number of people killed in the forced labour camps. But Jews did not only die  in forced labour camps: 390 others were killed in various other ways in Tunisia. Some 365 people lost their lives in the death camps, mainly in Auschwitz, reports  Hayoun.