A graduate of the Hebrew University, Shmuel Trigano is emeritus professor of the University of Paris and the author of 25 books on philosophy, history, sociology – mostly of Jewish interest. 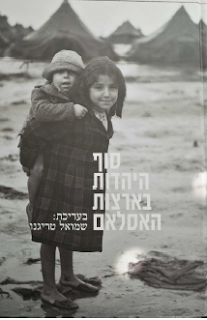 Front cover of the Hebrew version

Between 1940 and 1970, after the destruction of European Jewry, an event was ignored. The Jewish communities of the Arab-Muslim world have disappeared almost completely. About one million Jews were forced to leave their countries. Some 600, 000  found shelter in Israel, where they constituted the majority of the population. Without them, Israel would not have survived.

Nevertheless, The history of their aliyah concealed the other side of that history: the side of the expulsion, of exclusion, of  oppression, of discrimination for nationalist and Islamic motives. Colonial rule freed the dhimmi, the other Muslims from the state of humiliation they were in. But once the colonialists had gone, the Jews were again destined to be second-class subjects. Crucial proof of this is the hostility of the Arab-Muslim world that persecuted them. As Israelis in the State of Israel,  they became free citizens. Why and how was this history repressed, first and foremost by the Israelis, and even by some of the Sephardim themselves? Worse still, why was it ignored by academia and political elites?

This is the best-kept secret of the conflict in the Eastern Mediterranean. Its ramifications for Israel’s image in international policy are particularly damaging. It paves the way  to an ideological war waged by the Palestinians against the State of Israel. More deeply, it forbids the Sephardim from putting their trauma into words and prevents them from revealing their own history.