The Negotiations Affairs Department of the PLO tweeted this on Friday: 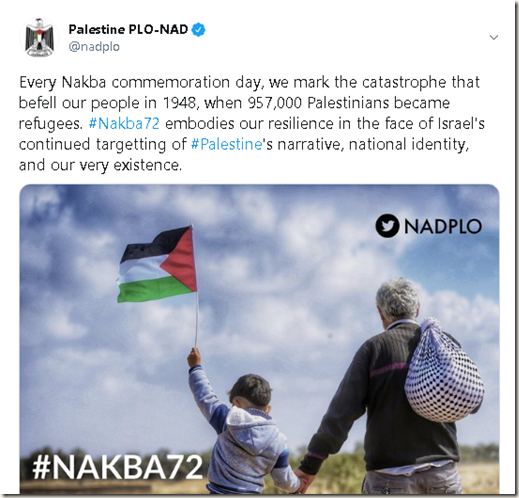 The only place that this number is mentioned was in an UNRWA report from 1950. Yet even then, in the chaos of trying to set up a new agency with thousands of people attempting to pretend to be refugees in order to get free food, UNRWA knew the number was wrong:

In May, the first month of its active life, the Agency, with more than 950,000 names on its refugee lists, attempted to cut ration distribution to 800,000, but so many debatable cases were brought forward and so much adverse discussion arose that it was decided that 860,000 rations were the minimum feasible to distribute unless the Agency was to leave itself open to grave criticism on humanitarian grounds.…Although many fraudulent cases have been discovered, it is important to remember that the deductions are made from the names inherited from the Agency’s predecessors…. It is regretted that, despite its earnest desire to do so, the Agency has to date been unable to remove many undeserving individuals from its relief rolls. It has no illusion about the unpopularity of its endeavours in that direction. It feels little hope that it will meet with any co-operation in its efforts toward the goal set. Conferring refugee status on non-refugees in the first instance has created a situation that cannot be ignored, but removing it exposes the Agency to unwarranted and unfair criticism from the misinformed public as well as fanatical opposition on the part of the undeserving recipient and his friends and supporters.

One of the first tasks undertaken by the United Nations Relief and Work Agency for Palestine Refugees in the Near East was to organize a census operation to determine who should and who should not receive relief. In spite of these efforts,… it is still not possible to give an absolute figure of the true number of refugees as understood by the working definition of “a person normally resident in Palestine who has lost his home and his livelihood as a result of the hostilities, and who is in need”. …A further difficulty is that, whereas all births are eagerly announced, the deaths wherever possible are passed over in silence, and as the birthrate is high in any case, a net addition of 30,000 names a year is made to the relief rolls. In spite of this, a considerable reduction has been achieved and many false and duplicate registrations weeded out. By June 1951, there were 876,000 persons registered on UNWRAPRNE relief rolls compared with 957,000 when the Agency took over.

This lower number is supported by an earlier UN report which said, in October 1950:

The estimate of the statistical expert, which the Committee believes to be as accurate as circumstances permit, indicates that the refugees from Israel- controlled territory amount to approximately 711,000. The fact that there is a higher number of relief recipients appears to be due among other things to duplication of ration cards, addition of persons who have been displaced from area other than Israel-held areas and of persons who, although not displaced, are destitute.

At any rate, the PLO is lying, as usual. No one on the planet has ever claimed 957,000 refugees in 1948, and even UNRWA didn’t claim that number in 1950 – just that this was the number of people who were listed on their rolls, many falsely.

And it is not only the PLO – the Palestinian Central Bureau of Statistics has also quoted the bogus 957,000 number as fact.

The entire Palestinian leadership is a mythocracy.