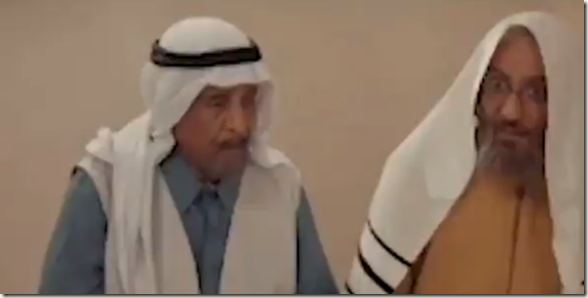 We’ve mentioned the Ramadan TV series “Umm Haroun” that has been causing so much controversy because it treats Jews in Arab countries as regular human beings.

A new outrage came from an incident in the latest episode.

A Kuwaiti Muslim and a Kuwaiti Jew who are brought before a British police officer – this is when Great Britain controlled Kuwait – who asks them, through a translator, about why they were fighting. The Muslim guy said that his son took the Jew’s daughter, and the two ran away and got married. The British police officer then asks what’s the problem, since they are from the same country. The Muslim then says that the Jew’s lineage is not honorable enough because, well, he’s a Jew.

To this the Jew replies with the part that is getting everyone upset. He says that the Muslim is not honorable enough for him, and adds that ever since Jews were defeated at Khaibar (by Mohammed,) Jews have been oppressed and wronged in the Muslim world.