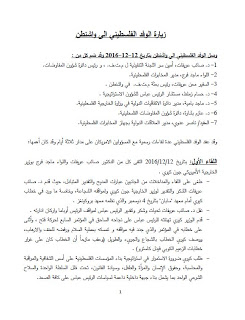 MEMRI has translated the article that Egypt’s Youm7 published a few days ago detailing the minutes of a secret meeting between top Palestinian officials and American officials including Secretary of State John Kerry and UN ambassador Susan Rice.

The Youm7 article is long, detailed and includes facsimiles of the minutes of this meeting as well as details of other meetings in mid-December between US and Palestinian officials:

The detailed description in the article and the images of the (at least) five pages of minutes, published only days after the UN resolution but dealing with many other topics, indicate strongly that this is not a fake news story as one often sees in Arab media.  It is largely consistent with what is known otherwise. The State Department daily briefing noted that Kerry met with Erekat on December 12 for a two hour meeting – a meeting that was then denied by the spokesperson John Kirby himself! 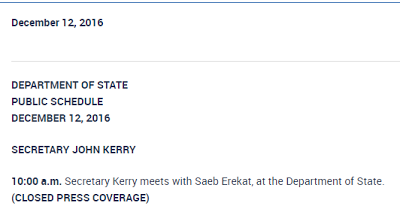 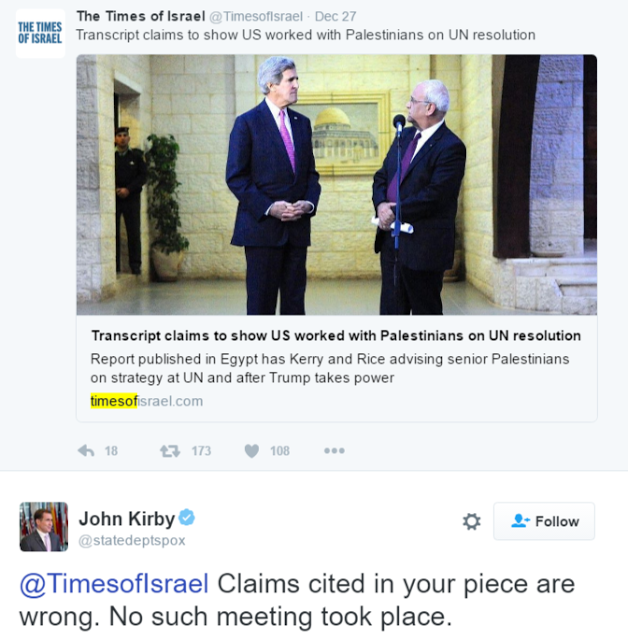 The Youm7 article claims that Kerry, Rice, Erekat and others talked about the resolution have been reported in Israeli media. In brief:

But the article goes much further as to what was discussed in the meetings, and those details are what give it plausibility.

“When Susan Rice asked what the Palestinian response would be if the U.S. Embassy was moved to Jerusalem, or if a new settlement bloc was annexed, Erekat responded: ‘We will directly and immediately join 16 international organizations, withdraw the PLO’s recognition of Israel, and cut back our security, political, and economic ties with the Israeli occupation regime, and we will hold it fully responsible for the PA’s collapse. Furthermore, we will [call] on the Arab and Islamic peoples to expel U.S. Embassies from their capitals.‘ Rice answered Erekat by saying: ‘It seems that future matters could be very complicated, and we are all apprehensive about sitting down with Erekat because of his absolute knowledge of these matters, and because of his memory and his sincerity.’ She expressed the American side’s respect and friendship for Erekat, and apologized for yelling at him in March 2014.”

Compare this with how the Times of Israel reported on Erekat’s threats if the US embassy would move the following week:


Furthermore, said Erekat, all American embassies in the Arab world would be forced to close — not necessarily because Arab leaderships would want to close them, but because the infuriated public in the Arab world would not “allow” for the embassies to continue to operate.
Erekat noted that he held meetings last week in Washington with State Department officials, but failed to secure meetings he had sought with incoming Trump administration officials. “I don’t know any of them,” he said of Trump’s personnel.

The report goes on to show how much the US State Department loves the PLO and hates Netanyahu:

“The Palestinian delegation thanked Kerry and Rice, and expressed Palestinian President Mahmoud ‘Abbas’s esteem for the views of U.S. President Barack Obama, Advisor Rice, and Secretary Kerry, and particularly for Kerry’s speech at the Saban Forum in early December,” the report stated, and added that the two U.S. officials had congratulated ‘Abbas “for his stunning success at Fatah’s Seventh General Conference and for his long and courageous speech (like those given by the late Cuban ruler Fidel Castro), during which he reiterated his positions and founding principles regarding his adherence to the peace process and his opposition to violence and terrorism in all forms.”
Also according to the report, Erekat and Faraj asked Kerry and Rice “to stress in the reports of the transition to the new administration that Palestinian President Mahmoud ‘Abbas, the PLO, and the PA are partners in the peace process, and that the Palestinian president and security apparatuses are strategic partners in the struggle against terrorism on the regional and international [levels].
“[They asked] that it be emphasized that there would be bilateral Palestinian-American committees in all areas (healthcare, education, agriculture, tourism, sports, trade, security, women, youth, and more) and that the new administration would oversee them together with Palestinian Prime Minister Dr. Rami Hamdallah.” Additionally, the possibility of “establishing a joint database together with the Palestinian ambassador to Washington and a representative from Palestinian general intelligence” was raised.
Kerry and Rice said, according to the report, that “all the above matters will head the transitional report now being prepared by the team of the outgoing president, Barack Obama, for the new American administration.” They also “praised ‘Abbas’s courage, positions, leadership, and adherence to the culture of peace and to peace as a strategic option, in addition to his opposition to violence and terrorism, to the ongoing security coordination, and to his being considered a uniquely strategic and courageous leader in the Middle East. The success of [Fatah’s] Seventh General Conference. they [said], had effectively ended attempts by Muhammad Dahlan and others to weaken President ‘Abbas, who must now act to tighten his relationship with Saudi Arabia, Jordan, and Egypt.”[5]
It continued: “Rice asked the Palestinian delegation to convey U.S. President Barack Obama’s gratitude to Palestinian President Mahmoud ‘Abbas for honoring all his commitments to him, and added: ‘Abbas was open and honest regarding all his commitments, especially regarding [Palestine] refraining from joining the 16 international organizations [as a member state].'”
Kerry and Rice also said that it was necessary “to continue American-Palestinian, Israeli-Palestinian, and American-Israeli-Palestinian security cooperation in all fields.” In this context, said the report, Faraj stressed that “the cooperation between Palestinian security apparatuses [and Israel] is carried out according to the clear and direct order of Palestinian President Mahmoud ‘Abbas.”

Kerry and Rice stressed that “Israeli Prime Minister Benjamin Netanyahu aims to destroy the two-state solution, and Dr. Saeb Erekat foresaw Netanyahu’s plan to create one state with two systems four years ago. The two said that Erekat’s prediction was highly accurate, and that all Netanyahu has to offer is maintaining the status quo, in addition to guarantees to improve [Palestinian] living conditions,” the report stated.

There are two things in the Youm7 report that seem strange to me. One is the parenthetical comment above comparing Abbas’ speech to Castros’ speeches, although they may have been referring to the length of the speech, which was over three hours long, and Kerry would know that the Palestinians loved Castro so this is a diplomatic compliment..

The other was that there were inconsistencies in the part of the minutes discussing US aid amounts to the PA, but I believe that the transcriber mixed up aid to the PA (which was reduced by Congress) and aid to the Palestinians altogether which is much more significant.

Altogether, this report is highly credible, and the State Department denials are not remotely plausible. The only other possibility I can imagine is that Russia planted the story in Youm7 to embarrass the State Department, which seems unlikely but cannot be discounted altogether. However, the details ring true with what we know about Kerry’s team from other sources.