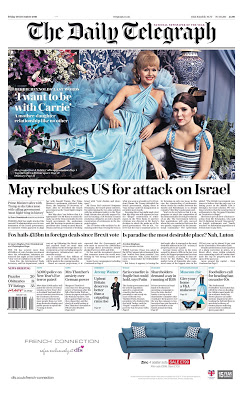 This story fascinates me:

Theresa May has attacked the current US administration over its condemnation of the Israeli government, in comments which appeared to align her with Donald Trump.

The Prime Minister’s spokesman criticised John Kerry, the outgoing US Secretary of State, after he described the Israeli government as the “most Right-wing in history”.

Mrs May does “not believe that it is appropriate” for Mr Kerry to attack the make-up of the democratically elected Israeli government, the spokesman said.

“We do not… believe that the way to negotiate peace is by focusing on only one issue, in this case the construction of settlements, when clearly the conflict between the Israelis and Palestinians is so deeply complex,” Mrs May’s spokesman said.

“And we do not believe that it is appropriate to attack the composition of the democratically elected government of an ally. The Government believes that negotiations will only succeed when they are conducted between the two parties, supported by the international community.”

The spokesman added: “The British Government continues to believe that the only way to a lasting peace in the Middle East is through a two-state solution. We continue to believe that the construction of settlements in the Occupied Palestinian Territories is illegal.”

Why would May say that it is inappropriate to focus on settlements when that is exactly what was in the resolution that her government voted for at the UNSC only a week ago?

I think that there might be something else going on.

Most reports about the behind-the-scenes drama of the UNSC vote show that the delegates were very surprised at the US abstaining from vetoing the resolution.

That hadn’t happened in many years.

The loss of the automatic US veto seems to have caused two new reactions:

One is that Israel responded harshly towards those who voted “yes,” even though they had done it many times before without any complaint when the resolutions were vetoed. (That was a tactical error on Israel’s part.)

The other is that other members of the Security Council were blindsided by the US decision. For so long, they had assumed a US veto on anti-Israel resolutions, so they had an easy decision to make: vote “yes” and keep their friends in the Arab world happy, while knowing deep down that the obsession that the UN has with Israel is absurd and counterproductive to its mission and one day they could become the victims of a witch hunt, too.

But when the US abstains, suddenly the other members of the Security Council – and specifically its permanent members – have a new responsibility.

They need to consider doing the right thing themselves instead of relying on the US to take the lead. Suddenly, their importance has increased as well as their responsibility.

If you take May’s statement at face value, then the UK might have voted “no” had they known the US intended to abstain. The entire calculus of the Security Council just changed from relying on a US veto to learning that there are actual consequences to one-sided resolutions that pass.

The US just created another leadership vacuum.  By childishly trying to teach Israel a lesson, President Obama has abdicated the US role as the de facto leader in helping the moribund peace process. John Kerry just made sure that US influence on Israel has lessened.

What national leader doesn’t want to fill a leadership vacuum?

Suddenly, France and Russia and the UK want to get more involved in the supposed peace process.

It is not entirely clear what this will mean down the line, especially with the new administration coming in. But the playbook has been changed and President Obama has left behind another legacy of weakening the US on the world stage.