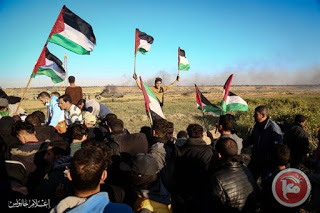 Every week’s Gaza border riots are given a theme by the Hamas-linked  High Commission for Return and Breaking the Siege.

The theme for today’s demonstration is “‘No to annexing the West Bank’, confirming the rejection of US Ambassador to the State of Israel David Friedman’s words and the rejection of US policy, which has become a flagrant aggression against the Palestinian people.”

The New York Times, however, headlined its piece with the false claim that Friedman said Israel has the right to annex parts of the West Bank.

And this lie is what was reported worldwide.

Although the march organizers would have found another theme for today’s riots even without this journalistic malpractice, anyone who might be injured or killed today in the Gaza riots can partly blame the New York Times for giving a pretext to the violence.

Words matter. Facts matter. The New York Times’ lies about Israel make a difference, and always in ways that are counterproductive.