About a week ago, a video from Israeli TV surfaced in the Arab world that has caused an uproar. 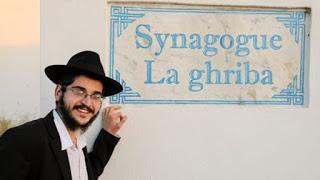 A group of Jewish tourists and pilgrims, in Tunisia for Lag B’Omer to visit the famous synagogue in Djerba, also went to visit some sites where their ancestors came from in a tour bus.

On the bus, one exuberant Jewish woman was filmed saying in Arabic, “God bless all the soldiers of the Israeli army! Long live Tunisia!  Long live Israel!” with each phrase answered with “Amen” by her fellow tourists.

Tunisians, ignoring the fact that Jews were blessing their country with long life, have been angry about this. They say this is proof that Israelis were allowed in the country. The Interior Ministry assured everyone that they did not accept anyone’s Israeli passport, but the angry Tunisians responded that these tourists had dual citizenship with Israel (probably true) and should not have been allowed in to begin with (not sure how Tunisia could exclude them.)

Tunisia’s Tourism Minister, Roni Trabelsi, is Jewish, and of course he is being accused of specifically recruiting Israelis to visit Tunisia. Journalists are calling for him to resign. Trabelsi denies it and notes that antisemites have been out to get him since he was appointed.

Other Tunisians found a different thing to be angry about. They said that the tourists visited near where Israel assassinated Fatah leader Khalil al-Wazir (Abu Jihad) in 1988. In fact, they were kilometers away from that site, but facts aren’t convenient when inciting antisemitic hatred.

The event has had other political implications. Some Tunisians are accusing the Al-Mayadim channel that has publicized this video as attempting to take down the Tunisian government by implying that it has abandoned the Palestinian cause.

Still others say there is nothing wrong with maintaining relationships with Jews of Tunisian origin who live in Israel, as long as it is not recognizing Israel.