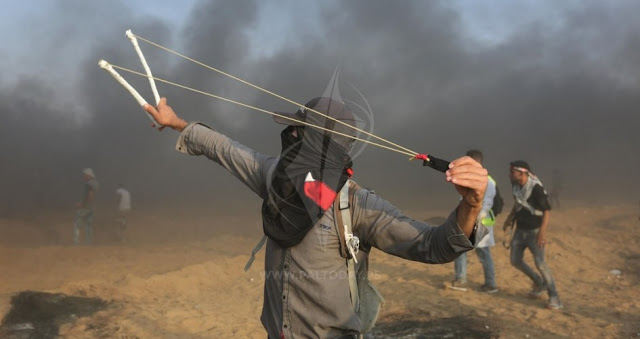 Every week, the riots at the Gaza fence have a theme. In the beginning the theme was for “right to return” but then the weekly themes branched out into other areas, like honoring Palestinian workers, or their flag, or commemorating the 1967 war, of honoring martyrs.

This week the theme isn’t aimed at boosting the morale of Gazans nor demonizing Israel, but to protest Arab states who “normalize” relations with Israel.

The title of this week’s riots is “Normalization with the enemy is a crime and betrayal.”

Organizers of the march – meaning Hamas –  issued a statement saying  they “condemn all steps and projects towards normalization with the occupation” calling on the people of the Arab and Islamic nation to “confront normalization” and saying that these moves towards peace will result in “looting of Arab goods.”

Other officials from Gaza factions issued statements against “normalization” as well.

It is notable that the so-called “peace camp” in both Israel and the US have all but silent on the incredible meeting between Netanyahu and the Sultan of Oman, as well as recent invitations for Israeli officials to attend meetings in Bahrain and the UAE.

Perhaps they agree with Hamas that peace and “normalization” is a terrible idea, when so-called “most rightwing government in Israel’s history” is the one that has been successful in moving towards those goals.