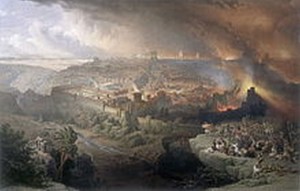 Jerusalem, December 28 – The Roman general commanding the forces surrounding the Jewish capital sent messengers today to the leaders of the besieged stronghold urging them to comply with Security Council Resolution 2339, which declared that a Jewish sovereign presence beyond the 1949 lines is illegal.
Titus Flavius, who took over the siege when his father Vespasian received word he had been appointed Emperor of Rome, cited the relevant decision of the United Nations, noting the fact that in deeming Jewish settlement or construction beyond the armistice lines illegal under international law, the Council automatically rendered the entire Jewish stronghold currently under siege an illegal entity that must be dismantled. That could happen, warned Titus, by peaceful means if the defenders of the city simply gave up the fight and agreed to be subjugated and sent elsewhere, or it could happen by force if necessary, and the Roman Legions laying the siege were prepared to subdue Jerusalem by those means.
“Be advised that in accordance with United Nations Security Council Resolution 2339, adopted December 23, 2016, this Jewish settlement of Jerusalem constitutes a violation of international law, in its consisting of Jewish settlement beyond the retroactively recognized boundaries that obtained prior to June, 1967,” read the general’s message, conveyed by courier. “Any attempt to thwart our action, sanctioned under the same international law, will be met with uncompromising force. Surrender, Jews, or face the wrath of the international community.”
Resolution 2339 was adopted by a 14-0 vote in the Council, with the United States pointedly abstaining and declining to veto the measure. In so doing, the Obama administration departed from decades of American presidential policy that shielded the Jewish State from overt bias in the UN and its various organs. Observers predicted the chilling effect the American and international move would have on the Jewish effort to maintain control over their ancient capital and homeland in general.
Titus and his troops have been battling a Jewish insurgency against Roman rule that erupted in the year 66. Only once Vespasian took command and brought in overwhelming numbers of Roman soldiers was the tide turned, and now the Jewish State remains in control only of its capital Jerusalem and several isolated outposts. “We gave Jewish legitimacy a good number of generations, but it doesn’t seem to be a recipe for peace,” explained Flavius Josephus, a spokesman for Titus. “It might be time to deport these rebels by the hundreds of thousands and rename the place to help remove the connection between the Jews and Judea. I humbly suggest something ironic, such as ‘Palestina,’ a word that itself means ‘invaders.’ The joke will be on whoever uses it to establish a claim of indigenous status.”