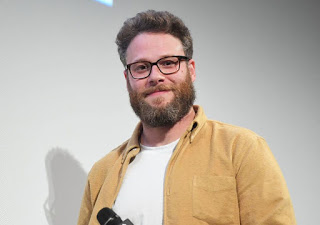 There has already been a lot written about Seth Rogen’s interview on Marc Maron’s podcast, but I want to focus on a section that isn’t getting as much attention:


I don’t understand. To me it just seems very, like an antiquated thought process. Like, if it is for religious reasons, I don’t agree with it because I think religion is silly. If it is truly for the preservation of Jewish people, it makes no sense, because again, you don’t keep something you’re trying to preserve all in one place especially when that place has proven to be… pretty volatile.

Rogen’s atheism is not a surprise to those following his career – after all, his movie Sausage Party was a raunchy, funny discourse on how God doesn’t exist. He is now saying that without the existence of God, then Israel has no reason to exist either, and in fact is counterproductive for the preservation of the Jewish people.

Rogen thinks that he is progressive and analytical and challenging the status quo.

Which brings me to Sophie Leib-Neri, a rising junior at Washington University in St. Louis, who wrote an excellent essay on Tisha B’Av while interning at the Israel Forever Foundation. These excerpts are the best answer I can imagine to Seth Rogen.

As an atheist Jew I have been challenged to question each of my Jewish practices. Why would I fast on Yom Kippur? Why do I keep Passover? And in regards to the upcoming holiday (which is more a holy day than a holiday), why do I care about Tisha B’Av?

Tisha B’Av, the 9th day of the month of Av (Jewish calendar) is the day when both the first and second Temples were destroyed, the first by the Babylonians in 586 B.C.E.; the second by the Romans in 70 C.E.

Over time, Tisha B’Av has been expanded to encompass mourning for all horrible events in Jewish history. Therefore Tish’a B’av includes the Spanish inquisition, the Holocaust, and the repeated expulsion of Jews from European countries among other horrible Jewish events. Tisha B’av is “marked” by a fast and a day of learning.

I find this to be the most inspiring aspect of the day. Not only do Jews take a day to remember these events, but they also engage in learning to further their understanding. For some Jews, this is a day to grapple with God allowing such vehement evil in the world. For others, it’s the opportunity to expand our knowledge of the seemingly constant Jewish struggle.

The destruction of the Second Temple, represents the most poignant instance in which the Jewish people faced violent adversity. The cultural epicenter of Jewish life was destroyed and the Nation of Israel was sent to a 2000 year long exile. How do a people retain their nationhood exiled from their land, scattered from their community and disconnected from the spiritual leadership that dictated the pattern and rhythms of Jewish life?

While I don’t find myself mourning the Temple as a place to pray, Tisha B’Av is an opportunity for me to contemplate the loss of culture, the shattering of the community and exile from the homeland to become strangers in a strange land, ever at the mercy of others.

In this light, the continued existence of the Jewish People as a Nation defies all understanding. And then there is Israel.

Mourning the Holocaust is difficult, but crucial in understanding the traumatic events which the Jewish people continually overcome. Tisha B’Av is similar, reaching back much further into our history – a lesson that the Holocaust is not the singular tragedy of the Jewish People but rather one of many attempts to eliminate our existence.

It is the rebirth of the Jewish State that serves as tangible proof of resilience of the Jewish nation – Tisha B’Av is a annual reminder of the difficulty in retaining Jewish Nationhood without a cultural, societal linchpin that holds us together. The Temple was the heart of the religion but it was also the place where Jews made pilgrimage three times a year, a place of ingathering, a place of unity.

While many Jews do not find themselves in practice of the religion, 2000 years have not changed the need to retain Nationhood through Jewish identity, shared values, purpose and unity. While we may not look to the Temple, we can look to Israel.

While some believe that miracles from God enabled the Jewish people to overcome, against all odds, I believe that it is the singular strength, the unique unity and spirit of the Jewish Nation, our ancestors, that has made this possible. Whether or not your Jewish identity includes the belief in God, there is always room for greater Jewish learning and understanding. If you believe in God, then Tisha B’av is a way to deepen your relationship with God by acknowledging the challenges He has given to the Jewish people and the miracles that have enabled them to be overcome.

If you identity as culturally Jewish, then Tisha B’av offers greater understanding of Jewish culture, the history from which it stems and the centrality of Zion in uniting the Jewish people over the centuries. If you identify with the tribal aspect of Judaism, Tisha B’av is a timeline of your family’s history and the obstacles they have overcome for you to be reading this today. If you identity with the land of Israel and the Jewish nation, Tisha B’av encapsulates the rarity of Jewish people having freedom to practice their religion and the miraculous achievement of the rebirth of the Jewish State and reunification of Jerusalem.

To Seth Rogen, Judaism is the Lower East Side, Yiddish and bagels. That is not “progressive and analytical” – it is puerile, yet it is the status quo among the “progressive” crowd that is now dominating American culture and media.

Contrast that with Sophie Leib-Neri – a truly progressive, thoughtful and proud Jew whose opinions are not close to the status quo. She looks at the Jewish people as a thriving, living and exciting nation and a family, and Israel is the Jewish people’s only home – and the people with the most compelling claim to that home.

If Seth Rogen really cares about questioning, he should read Sophie’s entire essay and try to argue against that.

Sophie has thought far more about the relevance of Judaism and Israel than Seth Rogen ever did. He can learn a lot from her.