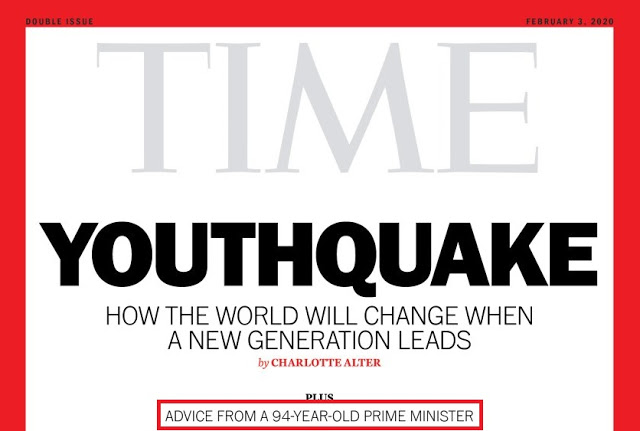 In February, there was an issue centered around today’s youth and the future. Featured was a piece by Mahathir Mohamed, then-Prime Minister of Malaysia.

Mohamed is a proud antisemite. He’s said so directly less than five months prior to this issue as well as previously. Yet Time didn’t think it was important to bring that up. In fact, Time also honored Mohamed as one of its most influential people of 2019 also without mentioning his antisemitism.

If Mohamed had defended racism, it seems unlikely that Time wouldn’t mention it. But antisemitism is more acceptable than racism is.

In its more recent special double-issue on a century of “Women of the Year,”  Time honored over a hundred women. The short bios were not hagiographic – they admitted that, say, birth control pioneer Margaret Sanger was associated with the eugenics movement, and that Indira Gandhi destroyed many basic human rights under her rule of India.

However, its piece on Angela Davis is entirely worshipful – despite her own antisemitism.

Besides her current support for boycotting the Jewish state, recognized by many nations and US states as being antisemitic and similar to Nazi boycotts of Jewish goods, Davis also scornfully rejected a chance to help Soviet Jewish dissidents in prisons behind the Iron Curtain. Around 1973, when Alan Dershowitz found out that Davis was accepting an award in the Soviet Union, he asked that she speak up to help the Jewish refuseniks, many of whom were arrested on charges of teaching Judaism. Her response was “They are all Zionist fascists and opponents of socialism” and the Jews should stay in prison where they belonged.

Yet Time doesn’t see fit to mention this proof that Davis is not a freedom fighter but an antisemitic socialist.

To add insult to injury, her bio in the piece was written by Ibram X. Kendi, author of “How To Be an Antiracist.” If you believe that Jews who want freedom from tyranny should be jailed, you are not an anti-racist.

A single racist tweet is enough to destroy careers. But explicit antisemitism is not. Time magazine proves that even in 2020, antisemitism is an accepted form of bigotry in mainstream media.