On May 25, 2016, a discussion at the University of Westminster featured Gideon Levy from Haaretz, Illan Pappe from the University of Exeter and Ruba Salih from SOAS (London University School of Oriental and African Studies). At one point, on the topic of the leadership — or lack thereof — of the Arabs, Pappe made an unexpected admission:

The issue is who started the BDS movement: the Palestinian Arabs or someone else?

In an article in 2010 for The Guardian’s Comment is Free, Barghouti claims the BDS movement is 5 years old, tracing its start to the “Palestinian Civil Society Call for BDS” on July 9, 2005 — a declaration that Barghouti was a part of.

While Omar Barghouti is the face of BDS, the idea of boycotting and isolating Israel actually originated  4 years earlier. On September 2001 in Durban, South Africa, the UN Anti-Racism Conference was held. An NGO human rights forum ran parallel to the conference and ended with a declaration. CNN reported at the time:


The forum’s document branded “Israel as a racist apartheid state,” and called for the establishment of a U.N. committee to prosecute Israeli war crimes and the complete isolation of Israel as an apartheid state.

The language of the declaration was modified due to the backlash, but the tone was set, and an academic boycott of Israel soon followed.

In April the following year, Steven and Hilary Rose called for an academic boycott of Israel in an open letter to The Guardian. It called for a moratorium on all cultural and research links with Israel.

In June, one of those signers, Mona Baker, a professor of translation studies at the University of Manchester, removed 2 Israeli professors from the editorial boards of 2 journals she owned: Translator and Translation Studies Abstracts. She went on to say that Translator would no longer publish any research by Israeli scholars and would refuse to sell books and journals to Israeli libraries.

Jon Haber of Divest This! notes similarly, “divestment campaigns at US colleges and universities, Mainline Protestant churches, cities and unions dotting the landscape starting in 2002.”

It would take another 2 years before, in 2004, the Palestinian Campaign for the Academic and Cultural Boycott of Israel (PACBI) was formed, with Omar Barghouti listed as 1 of the 8 original founding members:


The Palestinian Campaign for the Academic and Cultural Boycott of Israel was launched in Ramallah in April 2004 by a group of Palestinian academics and intellectuals to join the growing international boycott movement.

Only then, on July 9, 2005, was there a Palestinian Civil Society Call for BDS, accompanied by 170 Palestinian political parties, unions, mass movements and NGOs that signed on.

At the top of this list is the Council of National and Islamic Forces in Palestine, also known as PNIF. An article last year, BDS Umbrella Group Linked to Palestinian Terrorist Organizations, noted PNIF’s pedigree:

Jon Haber, of Divest This, already noted the PNIF’s terrorist ties back in 2010, suggesting that “it must be much easier for this Islamic Forces Council to get the Palestinian Dentist’s Association to agree to its agenda than vice versa.” Actually, it is no more surprising to see Hamas involved in the BDS movement than it is to see them behind the Gaza riots attempting to break through into Israel.

David Collier explains the implications of the BDS movement actually predating Palestinian involvement in it by 4 years:


With a single exchange, Illan Pappe, a master of illusion and deception, basically admits that BDS was created by external forces. Forces that were intent on destroying Israel. The Palestinians did not call for a boycott. BDS is therefore not a response to a non existent call. And therefore all the humanitarian left wing groups that have rallied behind the flag, followed Jew haters, communists and Islamists down a road that doesn’t actually care about the Arab civilians at all.

It is time to tear the entire movement down. The single ethical pillar that could have been used to support a boycott, despite all its other ethical failings, has turned out to be false.

Speaking of deceptions, another is the very idea that the BDS movement is a non-violent humanitarian group.

The Meir Amit Intelligence and Terrorism Information notes that Omar Barghouti supports armed terrorist attacks against Israel. It quotes from an interview he did in the November-December 2010 issue of Al-Adab, a Palestinian literary magazine. When asked if he supported ending the “Palestinian armed resistance,” Barghouti responded:


“No, we most definitely have a moral and legal right to an armed resistance against the military occupation of our land, even according to international law, as long as we attack legitimate targets, that is, the occupation, settlers [i.e., Israeli civilians] and people who are armed. We don’t attack anyone who doesn’t fight indiscriminately…the resistance is not an ideology or dogma. We cannot be neutral, but have to think about ways to resist that are suitable for our situation and goals, at every stage [of the struggle against Israel]…”

If Barghouti says that unarmed Israeli civilians are legitimate targets, it is no wonder how violent BDS supporters are on college campuses.

Similarly, the Canary Mission profile on Omar Barghouti features a video where Barghouti endorses “armed resistance.” He even goes so far as to falsely claim that such terror attacks are a legal right — when in fact armed struggle is not supported by international law.

If the face of BDS is going around endorsing violence, no one should be fooled by those who claim that the BDS movement is non-violent or surprised when BDS confrontations turn violent.

Not surprisingly, Barghouti endorses Antisemitic metaphors —  like another Omar we know:

One of Barghouti’s more well-known deceptions, actually an evasion, is the fact that as the face of the BDS movement, Barghouti has a degree from Tel Aviv University.

When confronted with this hypocrisy, Barghouti’s original response was:


My studies at Tel-Aviv University are a personal matter and I have no interest in commenting.

Faced with the obvious inadequacy of his excuse, Barghouti came up with others.


In 2009, PACBI (Palestinian Campaign for the Academic and Cultural Boycott of Israel) of whom Barghouti is a founding member, stated that Palestinian citizens of Israel or Palestinians carrying Israeli ID cards have no other possibility than to study in Israeli institutions and as such cannot be asked to join the academic boycott.

During a Q& at a session at Loyola Law School, Barghouti responded:


Oppressed people don’t have a choice of where they go to school.

The problem, of course, is that the issue is with Barghouti himself, not other Palestinian Arabs. He earned a masters in electrical engineering from Columbia University while living in the US for 11 years – where he travels on his speaking tours. Barghouti does have choices.

Even if he cannot afford to go back to Columbia or elsewhere outside of Israel, there are a number of universities in both the West Bank and Gaza.

Wikipedia has a list — of both colleges and universities, in the “West Bank” and Gaza.

Yes, there are choices.

And if Barghouti really is concerned, as he claims, that “Palestinian citizens of Israel or Palestinians carrying Israeli ID cards have no other possibility than to study in Israeli institutions” — there is good news: Arabs now outnumber residents of the territories at the first private Palestinian university in Jenin


Nur and Mohammed are two of the thousands of Israelis Arabs who are getting their higher education in the West Bank. At a time when the number of students attending universities in Israel is dropping, in general (students are also flocking to private colleges instead), a report from the Palestinian Education Ministry, which Haaretz has obtained, shows that the number of Israelis at the university in Jenin has climbed from 36 to 5,294 in a decade.

An organized transportation system takes students from their homes in the Galilee and Little Triangle area of Arab cities in central Israel to the West Bank. In fact, Israeli Arabs now make up a majority of the student body at AAUJ, the first private Palestinian university. Founded in 2000, the institution is located southeast of Jenin in Area A of the West Bank – i.e., under the Palestinian Authority’s full civil and security control.

Barghouti’s claim of no options outside of Israel is false. 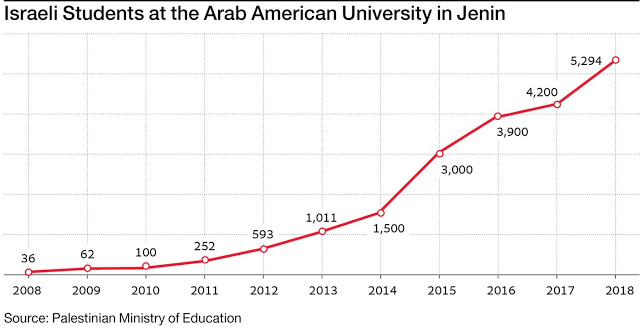 If you cannot trust Omar Barghouti — the face of BDS — to give you an honest answer, what can you expect of other representatives of BDS?