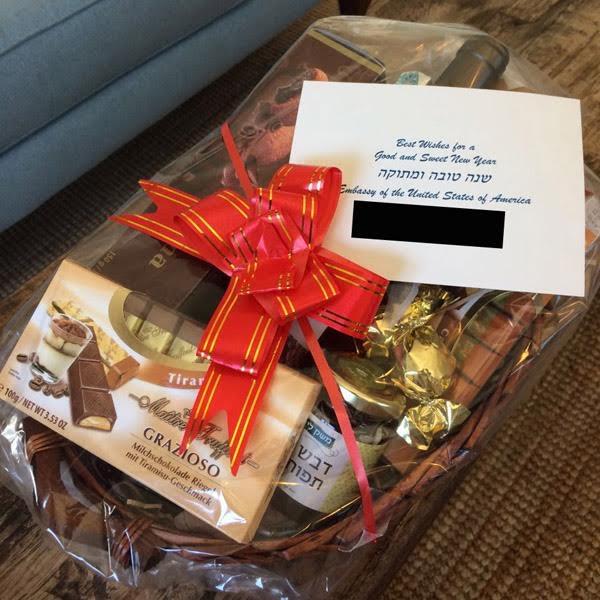 
Human rights organizations in Israel were in for a surprise on Monday when they opened Rosh Hashanah gift baskets sent by the U.S. Embassy in Tel Aviv. Among the various goodies delivered in honor of the upcoming Jewish New Year — such as chocolates and honey —was a bottle of wine produced in the occupied West Bank.

A broad range of organizations including Peace Now, B’Tselem, and Yesh Din, Gisha which focus on Palestinian rights and settlement expansion in the occupied territories, were among those to receive the gift basket.

The wine, a Cabernet Sauvignon named “Dolev” is produced by the Zion Winery located in the West Bank settlement Mishor Adumim.

In other news – the US Embassy in Tel Aviv sends gift baskets to organizations who do everything they can to oppose the Israeli government.

Does the US Embassy also send baskets of gifts to Regavim, or Im Tirtzu, or others fighting for the human rights of Jews to live where they want?

If not, it shows that despite arms sales, official US policy is to oppose the democratically elected government of Israel.

If the US sends holiday gift baskets to NGOs that oppose government policies in any other nation, especially democratic allies, I would love to hear about it.

This is a bigger story than accidentally sending out wine that was harvested in Judea and Samaria. As if that is a crime.