Esther Amini is the American-born daughter of parents who had fled Mashad, Iran, where the Jewish community lived as secret Jews after a 19th century forced conversion. In Concealed she tells the story of being caught between these two worlds: the dutiful daughter of tradition-bound parents who hungers for more self-determination than tradition allows. Here is an extract from an interview with Esther  in the Jewish Week.

“The story of the Mashhadi Jews, who lived like Marranos or crypto-Jews, has never been told before in a first-hand or second-hand account,” Amini tells The Jewish Week. The women, who were not educated, were not writing diaries. The men weren’t putting their feelings into journals. There are written histories, but no memoirs or autobiographies or private accounts of what life felt like.”

Amini was able to learn of her family’s past from her late mother, who “was a big talker and would tell stories again and again.” Her father, in contrast, was withdrawn and did not speak about his past or about most things. She felt like she was the bridge between their history and the present, and felt a sense of responsibility to tell their stories. 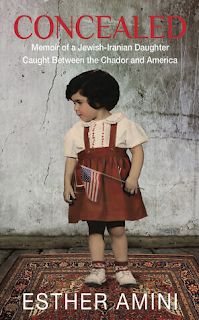 Her father, Fatulla Aminoff, who came from long line of landowners, merchants and traders, grew up in a home where speech was prohibited. His father disowned him when, as a young man, he came back from a boarding school for wealthy Jewish boys in England and then broke all ties when Fatulla married Amini’s mother, Hana Levi — she was 14 and he was 34 — when he was supposed to marry his first cousin, as was tradition. The age differences of Amini’s parents was customary; her grandmother married at 9.

Her mother’s mother, named Esther, died in childbirth, and her father died when she was 2. Hana was raised by a kind stepmother, but felt betrayed when she learned from someone in the community that she wasn’t her birth mother. Amini says that for her mother, “time froze then, she couldn’t get beyond that.” She lived in mourning for her mother.