Continuing on with the UN’s large permanent exhibit on the UN and the Palestinian question, we see this timeline: 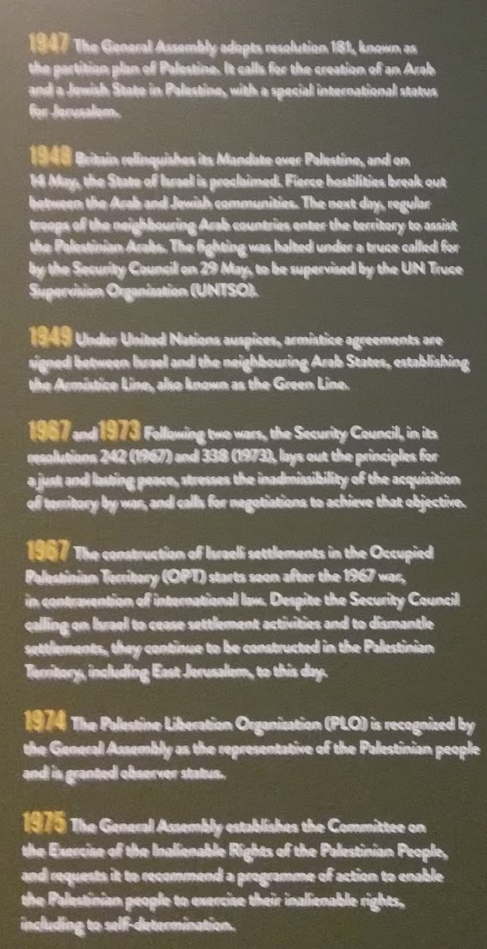 The 1948 entry is wrong. Palestinian Arabs started attacking Jews way before May 1948 – they started within hours of the partition plan vote in 1947. They killed scores of civilians before Zionist forces started defending themselves.

But the astonishing thing about this history is what is missing. Even though it is a history of the UN involvement in the issue, it doesn’t mention the UN accepting Israel as a state in 1949. The 1956 war is ignored completely, as are the fedayeen attacks on Israel from its inception through 1967. The threats of Arab nations against Israel – ignored. The actual 1967 and 1973 wars are essentially ignored. The formation of Fatah and PLO and other terror groups – ignored. Black September – ignored. Palestinian airline hijackings in the 1960s and 1970s – ignored.

The latter is especially important because there was at least one UN Security Council resolution demanding the hijackers release the passengers of one of those hijackings. The UN cannot claim that his history is only of its direct involvement with Palestinians and the other information is not relevant – because a UNSC resolution is a big deal yet it is ignored in this history, because the point isn’t to inform visitors of Palestinian history in the UN but to whitewash it.