Shurat HaDin put together a list of facts that, while not accusing Hezbollah of being behind the Beirut blat, sure makes it sound like they were not uninvolved. (Received via email)

As the Lebanese people struggle to recover from the catastrophic deaths and destruction wrought by the Beirut explosion, more questions than answers continue to arise. The official story, that in 2013, Lebanese port officials impounded a Moldovan flagged ship bound for Mozambique, laden with explosive chemicals, does not address other facts which have emerged and must be investigated: 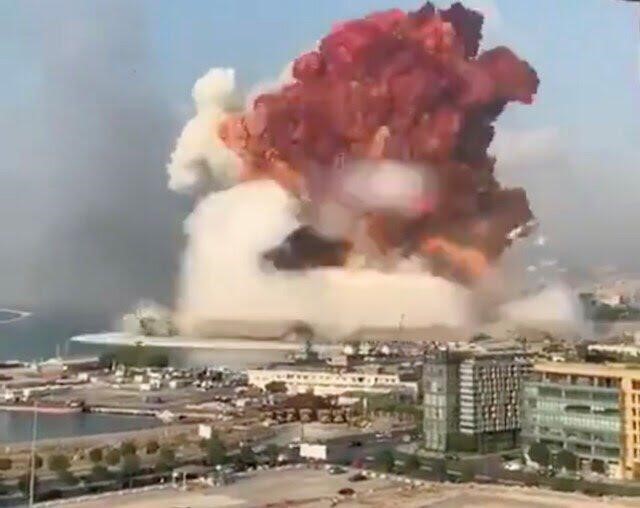 1.         Sections of the Beirut port are under the control of the Hezbollah terrorist organization. Israeli officials have long complained that the Beirut port, “the Hezbollah Port” was being utilized by the terrorists to smuggle contraband and weapons into Lebanon. As UN Ambassador Danny Danon recently stated: “Israel discovered that Iran and its Quds Force have been exploiting civilian maritime channels, and specifically the Port of Beirut.”
2.         Hezbollah has a long history of illegally acquiring and stockpiling ammonium nitrate in civilian areas. In 2015, Britain’s M15 and Metro Police carried out a raid on a secret Hezbollah warehouse in London that contained 3 tons of ammonium nitrate. The British government shamefully covered-up the raid in order not to damage relations with Iran shortly after signing the dangerous Nuclear Deal. It is believed Hezbollah was planning on using the chemicals for an attack in the UK. Click here

3.         The same year, police in Cyprus discovered a Hezbollah warehouse storing 8.3 tons of ammonium nitrate. A Hezbollah operative was arrested and charged with planning a terror attack. “A state prosecutor said Lebanese-Canadian Hussein Bassam Abdallah admitted that Hezbollah aimed to mount terrorist attacks against Israeli interests in Cyprus using the ammonium nitrate that he had been ordered to guard at the Larnaca home of another official of the Iranian-backed group.” Click here
4.         Israeli intelligence gave German police information, earlier this year, of the location of a Hezbollah stockpile of ammonium nitrate in southern Germany. The fact that the Iranian terror group was warehousing the explosives on German soil helped to push Berlin to outlaw all wings of the Hezbollah organization.  “Mossad reportedly gave Germany information about warehouses in the south of the country where Hezbollah stashed hundreds of kilograms of ammonium nitrate, a material used to make explosives.” Click here

5.         Hezbollah has a long history and deliberate strategy of stockpiling rockets, weapons and explosives in civilian areas. Hezbollah intentionally utilizes civilian neighborhoods including the basements of schools, mosques, residential buildings and hospitals as missile depots. The terrorists understand that the Israeli air force would be hindered in responding to rockets launched from civilian centers during the next war with Lebanon. And if Israel does attack the launchers and kills civilians, Hezbollah is counting on the UN, the Europeans and the ICC to immediately accuse Israel of war crimes. Hezbollah calls it this “Human Shield” program. Click here
6.         In 2016, Hezbollah’s chief terrorist Hassan Nasrallah had threatened to fire rockets at an ammonia storage facility in Haifa. He vowed that the explosion would be like a nuclear bomb striking Israel. He repeated this threat on several occasions causing Israeli officials to remove the storage tanks. “Hezbollah leader Hassan Nasrallah threatened in the past to destroy Israel by causing a massive explosion in the port of Haifa using ammonia tanks that he said would be like a “nuclear” explosion. In addition Hezbollah allegedly sought to acquire ammonium nitrate via Syria since 2009 and tried to infiltrate the agriculture ministry in Lebanon to do so, according to leaked diplomatic cables.” Click here

7.         On Valentine’s Day in 2005, a team of Hezbollah terrorists murdered then Lebanese Prime Minister Rafik Hariri with a powerful bomb in Beirut. 21 people were killed in the massive explosion. Hariri was a strong opponent of the Hezbollah group and the regime of  Syrian leader Bashar al-Assad that was attempting to control Lebanon. Four Hezbollah assassins are being tried in absentia by a UN court for the murder. Ironically, after 15 years of stalling, the UN’s Special Tribunal for Lebanon, hearing the Hariri case will deliver its decision on Friday. Its believed the Special Tribunal will declare Hezbollah as responsible for the bombing attack. Click here

Hezbollah’s long involvement in attempting to procure and stockpile ammonium nitrate perpetuates the growing suspicions that the Iranian terrorist organization, which rules Lebanon, was directly involved in the warehousing of the chemicals at the Beirut port. When the Lebanese population will finish dealing with the devastation and mourning its dead and wounded the finger-pointing at Hezbollah’s role in the tragedy will begin in earnest. The Special Tribunal for Lebanon whose verdict in the Hariri assassination trial will further emphasize Hezbollah’s guilt. Hezbollah and its Iranian masters, the key source of Middle East instability, must be driven out of Lebanon.