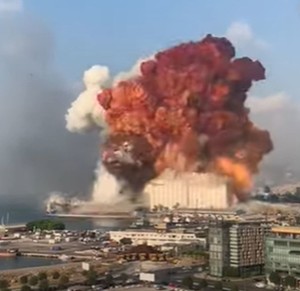 Tehran, August 6 – Supreme Leader Ayatollah Ali Khamenei and several of his top officials voiced gratification today following a catastrophic explosion in Beirut yesterday that killed more than a hundred and injured thousands, in appreciation for the millions of Middle East lives they have at their disposal in an ongoing campaign to extend Shiite hegemony across the region and destroy Israel in the process.

Iranian political and religious figures at various levels of the mullahs’ regime reacted to the detonation of hundreds of tons of ammonium nitrate in the Lebanese capital – leaving an immense crater and sowing destruction and death for miles around – by thanking Allah that those poor Lebanese victims serve as mere pawns in Tehran’s schemes to dominate the Middle East, in addition to the pawns suffering for the same cause in Yemen, Iraq, Syria, and the Palestinian Territories.

“Praise to Allah,” intoned the ayatollah at a meeting of senior advisers Thursday, “that the people of Lebanon die for our noble goals. The millions of Lebanese who endure political instability, incompetent administration, economic collapse, and the constant threat of violence, do so in service of our divinely-sanctioned vision for the entire region. They should be thankful to participate in this grand project.”

“With the way things have been going lately, it’s a relief to also have the Lebanese as cannon fodder,” explained Minister of Foreign Affairs Javad Zarif. “Our glorious supreme leader has previously expressed resolve to fight the Great Satan [the United States] and the Little Satan [Israel] to the last Palestinian, but that resolve extends to the tens of millions of other residents in neighboring countries, most notably the ones where the militias and other forces we support, supply, and coordinate fight to cement our control.”

Iranian analysts praised the evident willingness of Lebanese, Yemenis, Palestinians, Syrians, and Iraqis of all stripes to die for Iran’s ambitions. “It’s encouraging,” observed commentator Shivermit Imberz. “Our leadership must feel heartened by the vast number of bodies it can throw at various enemies, and use to cushion itself from various disasters, outside Iran’s borders. Allah knows the people inside Iran itself, in contrast, have shown in protest movement after protest movement that they have far less tolerance for those ambitions, preferring for some bizarre reason that the leadership focus on the economy, coronavirus, infrastructure, and not provoking the US, the Saudis, Israel, and whomever else into sabotaging every goddamn installation. Ingrates.”