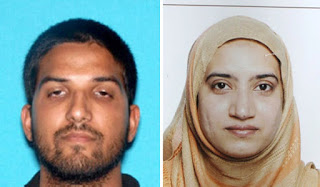 In 2015, Syed Rizwan Farook and his wife Tashfeen Malik shot and killed 14 and injured 22 more at the Inland Regional Center in San Bernardino, California. They were killed in a shootout with police later that day.

Farook had a life insurance policy and checked it to make sure it was still valid right before the attack, and his mother fought to remain the beneficiary.

In 2017, a state representative in Minnesota introduced a bill that would allow insurance companies to limit payments to beneficiaries if the insured’s death occurs directly or indirectly because of “furtherance of terrorism.”

One person voted against it because he thought there was a loophole that could cause insurance companies to not pay for legitimate claims.

The other person was Ilhan Omar, new member of Congress.

Omar literally wanted terrorist families to be paid by life insurance companies if they get killed by police after their attacks.

Knowing her politics and sympathies, I don’t know any other way of interpreting her vote except as an explicit support for terrorists on American soil.