Both actresses claimed that Egyptian director Khaled Youssef shot these videos for them in 2015 in an apartment owned by him in El Mohandessin district.

Farouk and El Haga said that Youssef married both of them customary and that they obeyed all his demands to help them in their artistic career and give them roles.

The film was shown on Israeli TV, and from what I can tell between that and Arabic news stories, the actresses were dancing in their underwear. 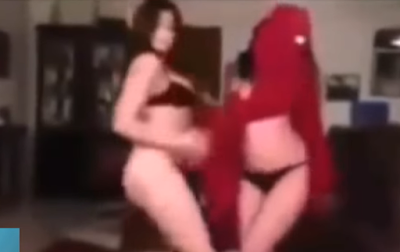 The article makes it sound like the director “married” them both before he filmed them. He is now in Europe with his real wife and says he will explain all.

Israeli news showed an Egyptian TV host who said that the two actresses must be executed for this heinous crime of dancing in their underwear.