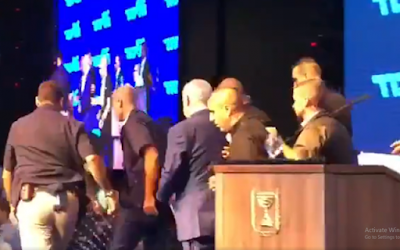 Palestinian Arabic media are filled with stories about Netanyahu going to a rocket shelter in Ashdod yesterday during his press conference as the Red Alert sirens went off.

It seems likely that the rocket fire was calculated to do exactly this – disrupt the press conference and make headlines worldwide.

It was exactly the same logic that a two-year old child who cannot quite communicate her feelings uses when making a temper tantrum.

Palestinianism is being sidetracked by the world. Over the past few years more and more people – especially Arabs – have realized that the old formula of “linkage” that said that the Palestinian issue must be solved before anything else could happen in the Middle East was not only wrong but counterproductive. Arab states have other concerns; Syria showed that hundreds of thousands of people could be killed  in the region without any link to Palestinianism, and the more that Israel conceded to Palestinians, the more intransigent they became.

Palestinians, sensing the change in direction, switched strategies to tie their cause not with the larger Middle East but with “progressive” causes. This new linkage has had some success in far-Left circles where antisemitism-disguised-as-anti-Zionism is an attractive option but it also results in a hijacking of many liberal agendas by anti-Israel activists, and this is also making many people sick of the Palestine cause. BDS is losing far more battles than it is winning, academic groups are treating pro-Palestinian issues like kryptonite as they see how places like the American Studies Association has only suffered after adopting anti-Israel policies.

Palestinians, who were so used to being able to push their agenda on cable news networks and major newspaper op-eds at will, now are seeing that the world is putting their issues in a more proper perspective. Compared to the real problems of people living in the region, Palestinians don’t have it that bad, and giving them so much oxygen has suffocated far more important causes for a long time.

But the anti-Israel, pro-terror activists are frustrated at this change in focus. They are like spoiled children who are suddenly forced to share their toys with others. They keep trying to come up with more and more absurd excuses to own the agenda (like accusing Israel of “veganwashing.”)

This mentality is shared between anti-Israel activists and Palestinian terrorists. They aren’t the center of attention anymore and they must stage a temper tantrum to regain the spotlight. A parent can’t ignore their child screaming in the middle of the market, can they?

Palestinians are proud that Gaza rockets are powerful enough to force an Israeli prime minister to react, just as toddlers are happy to get attention from their parents by screaming that they want a chocolate bar.

The difference is that up until now, the world has been patiently hoping that the Palestinian toddlers will grow up. In the years since Oslo, real toddlers have indeed grown up, started companies and had children of their own – but Palestinians and their fans have stayed exactly where they were.