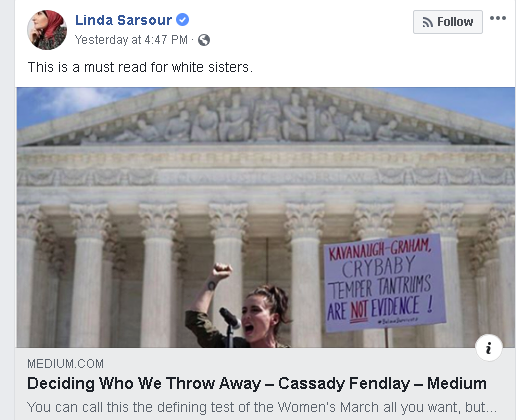 In the wake of #MeToo icon Alyssa Milano saying that the leaders of the Women’s March have not distanced themselves enough from antisemite Louis Farrakhan, faux person of color Linda Sarsour recommends  an article at Medium as a “must read for white sisters.”

Written by Women’s March coordinator Cassady Fendlay  it claims that Milano is a racist by her showing concern for antisemitism.

This moment, with Alyssa Milano, is exactly the type of thing black women were expecting. Alyssa is acting in accordance with the tradition of white women who use the labor of women of color when it’s convenient for them, and then use their power to trash those women when it becomes more expedient. Without being invited to speak at all, Alyssa brought up a 7 month old controversy in an attempt to force women of color to do exactly what she wants them to do.

The article goes on to say, sure, Farrakhan says things that are antisemitic, but look at all the wonderful things he does! Using the same words we’ve seen of anti-Zionists defending Hamas and Islamic Jihad terrorists, we are told:


If you spend any time working inside of prisons — which most white people will never even see — you would also observe the Nation of Islam providing services and support to black people who are incarcerated. Their prison ministry is focused on people getting out and becoming productive members of the black community, often through roles in providing security and peacekeeping.

Didn’t Bill Cosby also do some wonderful things? Does that make up for his being a rapist?

Somehow, inciting people against Jews is not “bad enough” to make up for the “good things” Nation of Islam does.

The article goes on to say that no Jew needs to worry about Nation of Islam rhetoric:

All of this isn’t to say that hate speech doesn’t matter. It does. But white supremacists are not joining the Nation of Islam, not now nor ever. And because of their proximity to power in our society — literal access to the highest office in the nation — real white supremacists are who we all need to be focused on, together. As Tim Wise insightfully writes, there is a history here.

The Tim Wise article referenced was another that tried to minimize Farrakhan’s hate as no big deal. But that article inadvertently explained exactly why it matters:

For Farrakhan, the Nation of Islam, and random black folks who sometimes say foul shit about Jews, the context is quite different. Indeed, in those cases, the context seems akin to what James Baldwin (who was, in many ways, quite the Judeophile) wrote in his famous essay, “Negroes are Anti-Semitic Because They’re Anti-White.”
As Baldwin explained, black antipathy toward Jews, when it manifests, is rooted in a few very specific and historically contingent forces. First, too often the “white people” whom black folks had to deal with (especially in Northern urban areas), and with whom many had negative interactions, were Jewish. Not because Jews really held power, but because Jews have long been the middlemen between real power and the most powerless (blacks and other people of color in the U.S.).
So, as Baldwin noted, Jews were often the landlords or property management folks (though not building owners) who would shake down tenants for excessive rent on dilapidated apartments, or the pawn shop owners to whom blacks had to turn for high-interest loans when banks shut them out, or the shop owners who overcharged them for out-of-date food.
And additionally, he explains, black folks resent the way that Jewish suffering is recognized “as part of the moral history of the world and the Jew is recognized as a contributor [to] the world’s history,” something he notes, “is not true” for blacks.

Wise is saying that black antisemitism is somehow less toxic than neo-Nazi antisemitism because it has different roots – and it is at least somewhat justified.

But what Wise doesn’t quite realize he is saying is that there is a relationship between Farrakhan’s rhetoric to the black person who resents Jews for reasons real or imagined.

As we have seen, in New York – one of the few places we have statistics – antisemitic violence is in a large part done by blacks. Blacks are attacking Jews in New York all the time. The videos that have been publicized of black people attacking random Jews have been horrific.

And for each physical attack, there are more cases of black people berating Jews in subways and on the streets.

There is a direct line from Farrakhan’s antisemitic slanders and black people attacking Jews, as in the recent incident where a follower of Farrakhan screamed at a Jew in a subway while onlookers did nothing.

But Wise, Fendlay, Sarsour and other Farrakhan and Women’s March apologists are claiming that blacks attacking Jews are somehow justified. Jews are the property managers! Jews are pawnbrokers! Jews take advantage of black people and when they attack Hasidim, they have a valid reason (as opposed to neo-Nazis.)

This is sick logic. The apologists for Farrakhan  all say, sure, his antisemitism is not to be celebrated, but…in the end, he has a point, you know? Blacks attacking Jews has a rich historical justification. And neo-Nazis are the real enemy of Jews. A few Hasidim who are the target of beatings and shootings and mobs seemingly daily are hardly worth mentioning. They really should be worrying about white nationalists. It’s almost racist for them to be in fear of people of color.

Just as long as the Jews of New York don’t look so Jewy, they won’t have any problems.

If one is going to blame the Republican party for creating an atmosphere where white nationalists can attack Jews, then one can and should certainly blame Farrakhan for directly inciting his tens of thousands of followers to hate Jews. Moreover, no mainstream conservative is justifying white nationalist antisemitism, but these articles by mainstream leftists indeed justify black antisemitism by comparing it with neo-Nazis and finding that it has more “logic” behind it.

To Wise, Fendlay, Sarsour and apparently many others on the left, Jewish lives really don’t matter, unless they are attacked by white nationalists.